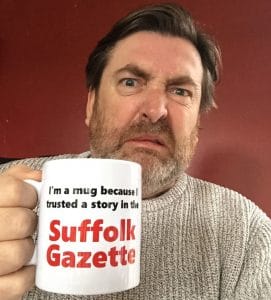 OPINION
By The Editor

There’s undoubtedly a substantial appetite for satire or funny spoof news – stories that bring a smile to readers’ faces while occasionally making them think about real issues of the day.

But online sites like my Suffolk Gazette, or similar ones like Southend News Network, the Rochdale Herald, Daily Mash, NewsThump and all, are under threat from two powerful sources.

Facebook and Google have just announced they intend to clamp down on “fake news” sites following allegations that false stories were deliberately circulated and shared during the US presidential campaign, possibly influencing the result.

Targeting clickbait fake news which is published for political gain, or to cause substantial damage to third parties, is to be welcomed, of course.

Yet this announcement is already being widely misunderstood, and many — including apparently sensible media like the BBC — are confusing damaging fake news with comedic or ironic spoof and satirical news like the stories we produce.

The BBC published an article yesterday focusing only on sites like ours — getting our name wrong on one occasion, incidentally — that missed the point of the announcement from Facebook, which emanated from founder Mark Zuckerberg himself.

He wants to clamp down on deliberate and damaging fake news, but right now the satirical industry is the one that might be hit by accident. If Facebook were to clampdown on the Suffolk Gazette, and Google were to prevent us from running adverts, we would be unable to reach new readers… and could not make any money.

And without making any money, I could not afford to pay for the technical and server support for this site. I run the Suffolk Gazette as a spare-time hobby… but for larger sites like the Daily Mash this is potentially far more serious.

I’m always surprised when anyone falls for one of our stories and, as regular readers know, gobsmacked when the so-called mainstream media also get taken in and reproduce them without any fact-checking whatsoever. But these are not stories that could trouble an election result, or damage third parties. Here are some of our stories that got reproduced as “real news” by newspapers and magazines, and I don’t think Facebook or Google need be troubled by them…

It is also true that I published many stories during the lead up to the US election, but revealing that a Suffolk thatcher had been hired to repair Donald Trump’s hair probably did not persuade a bloke in Texas to vote for him.

And while today I ran a story about a chocolate labrador that destroyed the family trampoline after watching the John Lewis advert, I don’t think this shifted political opinion in the UK.

While Facebook and Google’s fake news intentions might be welcomed, the consequences are far more wide-reaching. If you’re reading this, you likely already follow us on Facebook and enjoy our stories. This might be considerably harder if the lines between fake and spoof/satire are blurred – and Facebook prevents you from reading us at all.