The Queen has banned selfie sticks from all her palaces – because they upset her beloved Corgies.

Royal staff noticed the dogs thought they were sticks to be thrown so they could chase and retrieve them.

But the pampered pooches then became sad when all people did was use them to take pictures of themselves.

The problem became acute outside Buckingham Palace and Windsor Castle, where thousands of visitors were using selfie sticks each day.

And the news will come as further blow to selfie-stick lovers, coming after a number of institutions like the National Gallery also imposed a ban.

A Buckingham Palace source told the Suffolk Gazette: “The Corgies were yapping constantly because they kept seeing people with sticks at the gates.

“They assumed the were to be thrown for them, so they could have a game. But the tourists simply attached cameras to the sticks and took pictures of themselves.

“The Queen was furious. She hates anything that might upset the precious Royal Corgies – so she has ordered a blanket selfie-stick ban.

“Anyone spotted using them outside the Palace will be asked politely to stop by soldiers on sentry duty.”

Worryingly, the source added: “If they still persist, Her Majesty has ordered staff to set the dogs on them.”

The Royal ban was criticised last night by Suffolk selfie-stick manufacturer IStickitupyou Ltd. Sales Director Yassir Ikanboogie said: “I think the Queen has been a little too quick off the mark here.

“Selfie sticks provide a perfect way for visitors to record moments to be treasured for ever with their cameras and iPhones.

“Now their last photos could be of themselves being chased by a pack of snarling Corgies.”

IStickitupyou, which is based in Framlingham and employs 2,600 people, has been making selfie sticks for 75 years, and now fears redundancies. 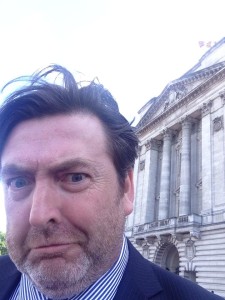 A tourist’s selfie at Buckingham Palace
But a spokesman for the Kennel Club was pleased with the Royal ban. “Dogs can easily get confused by selfie sticks. They always want to play, and so will become frustrated when no-one throws the stick for them.”