Poldark to ride in Grand National

Dashing Cornishman Ross Poldark is a shock entry for the Grand National, the Suffolk Gazette can reveal.

He spends most of each hour-long episode riding his horse along Cornwall cliff tops at breakneck speed, despite wearing a huge hat and cape.

Horse racing experts spotted his talent and soon made discreet enquiries to Poldark’s Cornish estate about signing him up for the big race at Aintree next month.

Newmarket trainer Leicester Biggot got his man and will now partner Poldark with his much-fancied horse Adnams Bitter in the Grand National.

Speaking from his famous Suffolk yard, Biggot said: “Poldark shows exceptional speed and skill on his horse every Sunday night on television.

“And he does this time and again – it’s almost as though he does nothing else. No wonder his family mining operation ground to a halt.

“Now I can put his riding skills to good use in the biggest horse race on earth.” 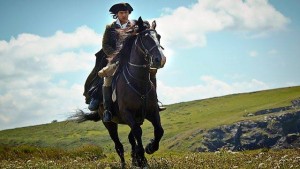 Poldark training for the Grand National
Bookies have already made Poldark even money to win the National on Adnams Bitter.

Paddy Power’s Kenny Wynn said: “It’s safe to say Poldark will be the housewives’ favourite for the Grand National this year.”

The Suffolk Gazette tried to contact Poldark in the 18th Century for a comment, but he was out riding along a remote Cornish clifftop.

But his alluring kitchen wench said: “He does love to mount up and have a good ride.

“And he definitely likes finishing first.”

Abandoned horse waits in vain for sire to visit

Man jailed for cheating on his wife with pony

Camel wins at the Cheltenham Festival