Man employed to sit on Big Ben and shout ‘BONG!’ every hour 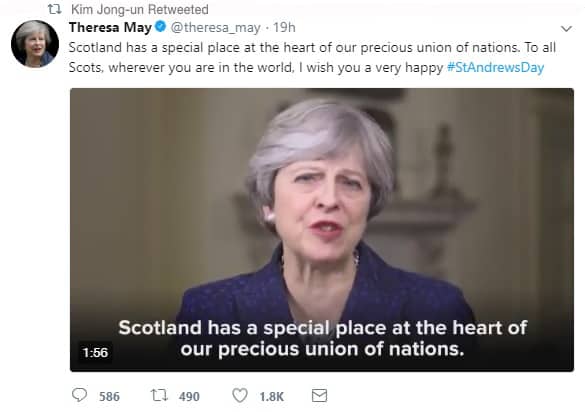 There was widespread shock and condemnation today after North Korean leader Kim Jong-un retweeted a video from a dangerous British right-wing group.

He was duped into showing his support for a well-known extremist who was spouting disgusting filth about the Scots.

The North Korean despot used his traditional early-morning session on Twitter to showcase the dangerous video from Theresa May, a right-winger whose views have sickened Britain for years.

There are now calls for Mr Jong-un’s state visit to Britain, where he was due to meet the Queen after holidaying on the Suffolk coast, to be called off.

Ordinary North Koreans have been quick to insist they are embarrassed by their leader’s support for the brutal Conservative Party.

Farmer Choi Hoo Sun, 42, who works just outside the capital Pyonyang, said Mr Jong-un had gone too far this time.

“He is supposed to be the leader of the Free World, but here he is openly supporting dangerous right-wing British extremists.

“It’s quite cool that he uses Twitter, but he really needs to think before he Tweets.”

Mr Jong-un retweeted a video in which Ms May, who is being watched closely by British secret services, appeared on camera to wish the Scottish people a happy St Andrew’s Day.

Political experts say the contents of the video can not be verified, and it is highly likely that Ms May does not care about Scotland whatsoever.

In other words, Mr Jong-un has unwittingly found himself promoting a propaganda video.

His spokesman Shin Seung Jin was left to face the North Korean media and defend his boss.

“The video itself may not be genuine, but the point it is making certainly is. That’s the real issue and Mr Jong-un is tackling it.”

Scottish people were furious that Mr Jong-un has now given credibility to Ms May and her rabid right-wing rhetoric.

Thousands of Scotland fans settled in Argentina after 1978 World Cup