The Queen asks Philip to take Prince Andrew for a drive 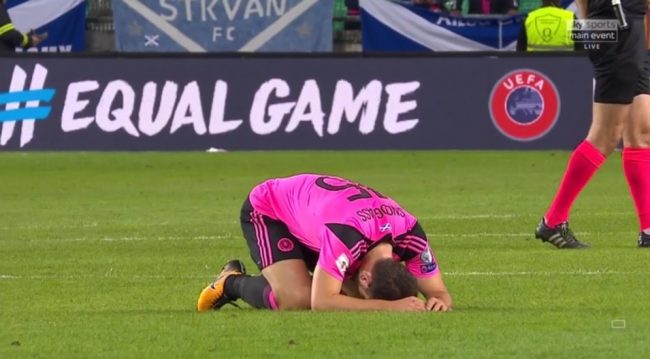 The Islamic State has claimed responsibility for Scotland’s disastrous exit from the World Cup, it has emerged.

A statement published by the group’s Amaq propaganda agency said it was behind manager Gordon Strachan’s dismal team selection and tactics.

Scotland needed to beat lowly Slovenia to make the playoffs – and be in with a shot of reaching the World Cup finals in Russia next summer.

But despite scoring first, the bottling Scots ended up drawing 2-2, meaning they will have to settle back and watch England bore everyone rigid instead.

IS is quick to claim responsibility for disasters across the world, and tonight’s football implosion was no different.

Security experts said they doubted Isis was really behind Scotland’s defeat, but the cruel statement was intended to be an integral part of its psychological warfare against the west.

Scotland watched in growing horror as its team failed to rise to the occasion – the country has now failed to reach the World Cup finals since 1998.

A Scottish FA insider said: “Anyone who supports Scotland really should not have expected anything different.

“We only have ourselves to blame – Islamic State can bugger off.”

Meanwhile, England were confirmed as Group F winners, winning 1-0 away at Lithuania to make it 26 points from a possible 30.

“We have to cling on to our memories,” a Scottish football fan said, “like Archie Gemmill’s goal against Holland at the 1978 World Cup.”

Football fans in Scotland will now be cheering on Ireland in the hope they can reach the World Cup instead.

55,800FansLike
9,857FollowersFollow
October 8, 2017
Previous article
Common cold says its life has been ruined by Theresa May
Next article
Motorists and cyclists ‘secretly love each other’