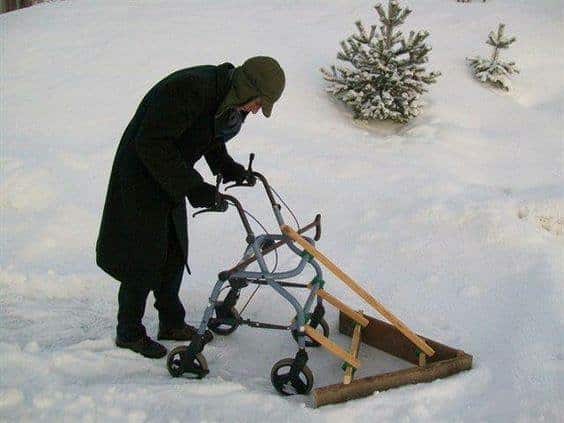 Elderly people are being exploited as cheap labour to clear pathways in Suffolk, an investigation has revealed.

Up to 700 pensioners across the county have been asked to adapt their walking strollers by fitting a mini snow plough on the front.

They get paid in biscuits and hot chocolate for every half a mile of pavement they clear.

But campaigners claim the scheme by local officials is a disgrace, and should be stopped before one of the elderly people comes to grief.

Our team of reporters found 15 of the pensioners clearing snow in areas from Bury St Edmunds in the west of the county, to Felixstowe and Aldeburgh in the east.

Audrey Smith, 88, from Felixstowe, shivered as she said: “My pantry is empty and my bungalow is freezing cold.”

Pictured above, nearly bent double as she work hard in the resort, she added: “So I signed up to help clear some of the snow because I like the idea of a snack and hot drink as a reward.”

However, charity worker Lorraine Fisher, 34, said the scheme was “disgusting”, and old people were being exploited.

“Instead of forcing them to clear snow in order to get a biscuit, we should all be pulling together to help them.

“I would urge everyone to check on elderly relatives, friends and neighbours to see if there is anything they need.”

“Elderly people are always keen to please, so I don’t know what the fuss is about.

“We have not had many accidents.”

Internet crashes as Brits inform each other it is snowing