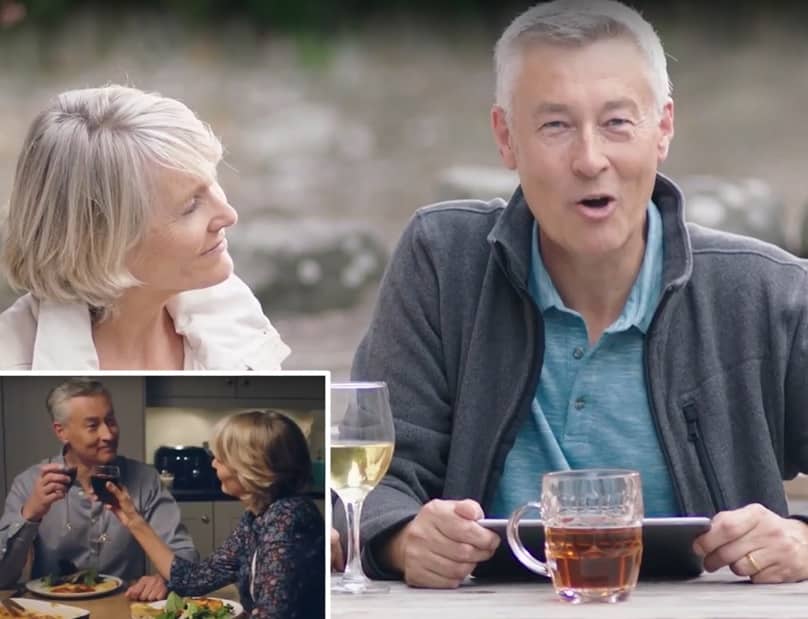 The couple in the Age Partnership TV adverts may not enjoy a long and healthy retirement after all – because they are raging alcoholics, it has emerged.

Keen-eyed viewers will have noticed that the husband and wife are throwing back alcohol at every opportunity.

In the 2017 television ad for Age Partnership pension income boosts, the pair are seen quaffing booze at lunchtime in a country pub.

She is downing an extra-large white wine, while hubby guzzles a pint of beer – half of which has worryingly been drunk in just one scene cut.

And if that wasn’t bad enough, the pair were on the piss again in the 2018 Age Partnership ad.

This time they were shamelessly demolishing a bottle of red wine at home – a sure sign they are on the slippery slope.

The husband told the Suffolk Gazette: “I started to think about my pension savings and their importance to our future (drinking). So I contacted Age Partnership and found most people miss out on more money (alcohol) by not shopping around for the best deal.”

He added: “They got me literally thousands of pounds of extra income (beer) from my pensions savings.”

His rather smug-looking wife, Lorraine Fisher, a bit older than 34, said: “It’s really made a difference to our life (drinks cabinet).”

Her husband concluded: “I also received 25 per cent of my pension as a tax-free lump sum (which we have already spent in the pub).”

Health watchdogs are concerned the adverts may drive pensioners to drink.

Expert Steve Walshe said: “If you are embarking on a home equity release plan, or looking to boost your pension savings with Age Partnership, we would recommend that unlike their television couple, you do not spend all the money on booze.

“Otherwise your dream retirement might be over rather sooner than you had hoped.”

55,833FansLike
9,852FollowersFollow
March 27, 2018
Previous article
‘Blaast me, buh’ – Steve McClaren reveals all about Ipswich job
Next article
Anxious police say they have nothing to go on

15 year old Karate kicked a pensioner into the river