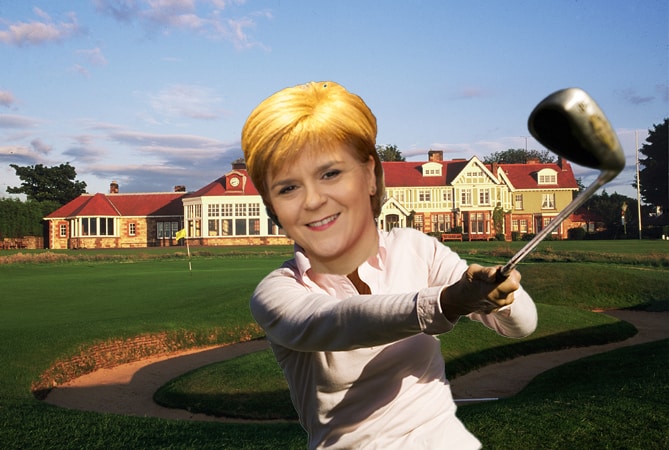 Nicola Sturgeon has become the first ladies member of stuffy Muirfield golf club after it finally voted to allow women to join.

More than 80% if the club’s crusty male members agreed to permit women to join them, a decision which will mean the Open Championship can return to the Scottish course.

Mrs Sturgeon said she absolutely loved it when organisations kept re-running referendums until they got the right result, and was keen to show her support now that Muirfield golf club had done just that.

Members refused to allow female members in a controversial vote last year, but held another secret ballot in recent weeks, announcing yesterday it had overturned the original decision.

A pal of Scotland’s First Minister, who this week announced she would go for a second Scottish independence referendum, said: “Nicola has no idea about golf but loves it when a poll is re-run if you do not get the desired result the first time.

“She was furious when the golf club’s first decision did not go her way, but believes wholeheartedly in the concept of simply re-running the vote until there is a ‘yes’.”

Scotland’s First Minister hit the fairways last night to celebrate her new membership, and enjoyed a score of 89. From four holes.