The Suffolk Independence Referendum has resulted in an overwhelming ‘Yes’ vote, meaning the county will rule itself from next month. 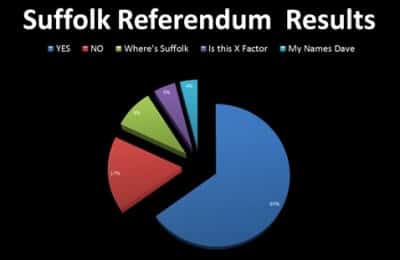 But what changes lay ahead for the good people of the county?

Language: The new local language shall be named “Suffikish”. All households will be sent translation dictionaries in due course. Old English, New English, Web Slang and Urban Slang will be outlawed by the Suffolk Sherriff June Brown, aka Dot Cotton (see tips from the new language at the bottom of this article).

Border Policy: Existing UK Passports will be valid until the end of 2015. Suffolks will be able to leave and come as the please, however all non Suffolks will require a Visa or Debit card issued from the RBS (Royal Bank of Suffolk). The Royal Bank of Scotland, at first outraged with the copyright infringement, soon calmed down after some Suffolk Whiskey, and insisted: “Och aye, we will support th’ suffolk dollar,” or something similar, along those lines.

Health Care: One book of plasters will be issued to all households once per month. Links to YouTube videos will be available for all other medical emergencies, 24 hours per day. Suffolk’s own Dr Surresh Getawells said: “These days Google can explain ways to get better more than most GPs. Toothpaste is often the answer.”

Flag: Changes to the flag are not final, but after a $7 million Suffolk Dollars investment in the county’s future, the first mock-up is available..

Suffolk has a population of over 730,000, and each of the 73 sheep represent 10,000 residents. We’d like to the world to take note that we are not sheep, we are independent!

(The language will be a tough one to crack; all signs will be replaced throughout Suffolk in the coming months)

Summary
The future is indeed bright for Suffolk, if not as bright as the new flag, we welcome these changes at the Suffolk Gazette and declare April 1st Suffolk Independence Day. On that note, we bid you reversolk hellolk.

55,844FansLike
9,830FollowersFollow
March 29, 2015
Previous article
New Tube line will connect Ipswich to London
Next article
Easter should be all about chocolate, says bishop