By Our Foreign Affairs Staff

North Korean dictator Kim Jong-Un caused outrage today by setting off a huge nuclear explosion while holidaying in his caravan on the Suffolk coast.

The despot feasted last night on a tasty-but-spicy curry at an Indian restaurant in Leiston, and was still suffering the consequences when he woke up in his caravan at Sizewell this morning.

Rather than stink the place out, he wandered down to the beach, which is popular with holidaymakers and dog walkers, to set off the explosion towards the North Sea.

But the resulting blast, captured on film and passed to the Suffolk Gazette by a concerned reader, was so huge it registered a 5.3 magnitude tremor, while the vindaloo and onion bhaji fallout is still being felt as far away as Aldeburgh and Southwold. 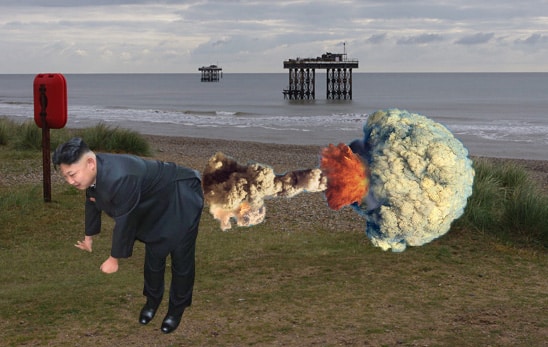 World leaders were furious, threatening further sanctions against the rogue state. Even China, a long-term ally of North Korea, has now seemingly turned its nose up.

The Suffolk Gazette revealed last year how Mr Jong-Un had purchased a caravan at Sizewell after falling in love the area during a secret visit to the local power station.

Our Editor even got an exclusive interview with Kim Jong-Un, where he backed the leadership of good comrade Jeremy Corbyn.

Up to now he has enjoyed peace and quiet on his trips to Suffolk, with his secret service ensuring he was not bothered by inquisitive locals.

However that may now change, with an action group being created to monitor all Kim Jong-Un’s movements, particularly after a curry.