The latest dispatch from the Suffolk Liberation Front reveals an incursion into Lincoln as well as a temporary evacuation of Great Yarmouth. In business news, there is talk of an unusual trade deal with China. And, as standard, there are veiled threats to the Suffolk Gazette Editor to publish this dispatch… or face the consequences.

Sir,
First of all a thank you for publishing our regular news updates – it prevents us from having to visit The Greyhound and asking you why you’re not printing them. We might also take you to the frontline after visiting your palatial home to check for any Norfolk fighters or sympathisers, which would mean taking your home down brick by brick and leaving it in a pile of rubble. By printing our updates you continue to prevent this. For now.

Apologies for the late news update but here is the news from the Suffolk Liberation Front.

During last weekend’s storms we withdrew our forces from Great Yarmouth (to safeguard them) and left the Norfolk residents to their own fate; this created such a power vacuum in the town that the British Army had to be rushed in to stop the peasants looting what little they had left, and burning their own hovels. We took the town back from a grateful British Army, who begged us never to withdraw from the town again. The official line was the army were there to help with the floods. 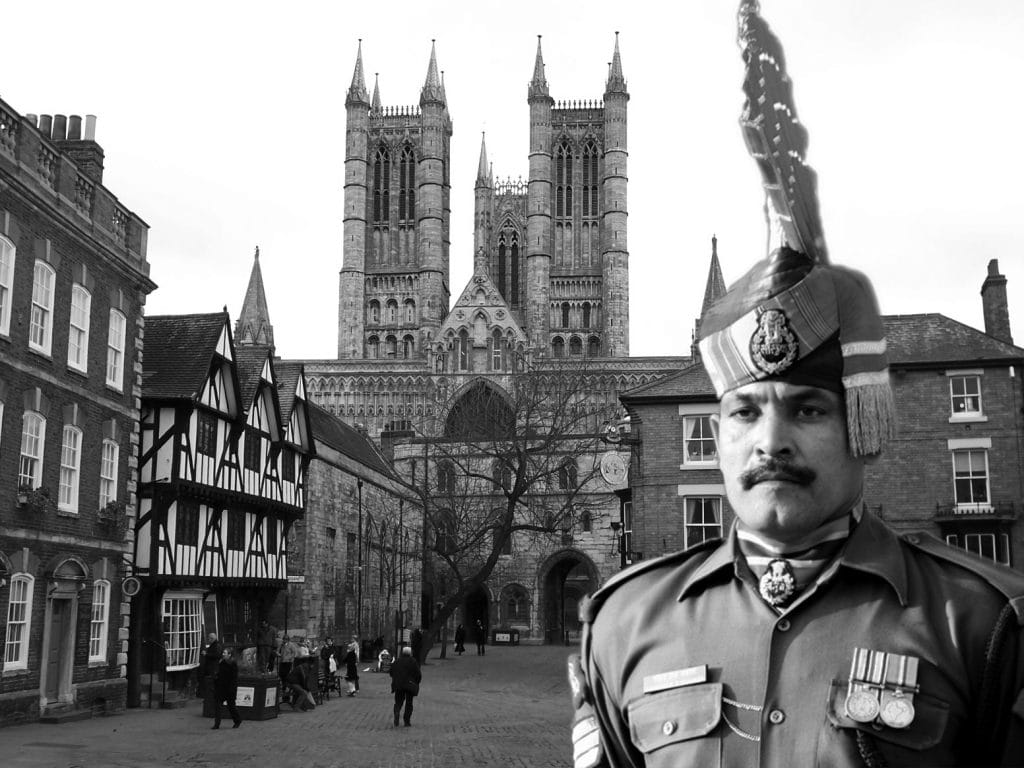 A proud member of the Suffolk Liberation Front in Lincoln

We also sent a significant part of our force to Lincoln on Tuesday to ensure the safety of the brave football supporters who went there to take on a gang of fishmongers, butchers and Lincolnshire peasants. We took Lincoln without firing a shot, and are continuing to loot the city before returning home victorious. There were some rumblings about a cup, so the SLF has ordered the destruction of any cups or mugs found there.

We continue to advance into Norfolk. Only last Sunday a brave group of the SLF drove towards Norwich and turned into a dark country lane off the A140, and went for miles into the countryside to a SLF safe house where we discussed tactics and further incursion with our agents there. The stage is set and we intend on moving north and west so as to encircle Norwich further. We don’t encounter much resistance from the pitchforks as we have new weapons now for reasons that will become apparent.

By far the biggest news is that we are currently negotiating directly with the Chinese government. We are asking for investment funds and fighters from them, so far they have armed us with a lot of weapons, vehicles and artillery, in return we are offering them slaves from Norfolk to work in their sweatshops and also the chance to operate slave camps, factories and sweatshops in Norfolk once we have invaded, bypassing the pesky Chinese anti-pollution laws which they have. It looks like we have a deal, the Chinese version of the tactical nuclear warhead will be very useful for taking down Kings Lynn.

We have a also found nuclear weapons left by the Americans in an underground bunker in Rendlesham Forest, which we have tested against Sheringham and found to be still quite lethal, so we hope Norfolk will capitulate quickly and that we can all go to a training base with you, The Editor, where we can administrate an independent Suffolk via Skype.

We are united, we are Suffolk.