Suffolk GazetteYou couldn\'t make it up
More
HomeFeaturesIn My Lady Garden
May 20, 2016

I’m growing for Gold at The Chelsea Flower Show!

This is supposed to be a secret but you all know how gobby I am and I’m so excited that I cannot keep it to myself! I’m in line to pick up the coveted Royal Whoreticultural Gold Medal for the Best Garden at the Chelsea Flower Show next week.

Eat your heart out Titmarsh and Monty Dong. A proper gardener is about to be honoured.

If the prize is snatched from me now it is all the proof the tabloids need that the competition is fixed in favour of Hooray Henrys and friends of the Royals, and that the judges are trousering a shedful of wonga.

I have spent the last few weeks setting up my glorious imaginative garden at the Royal Hospital grounds. The first thing I saw was a group of Chelsea Pensioners wobbling around in full regalia. I thought they were doing a remake of the Sergeant Pepper album.

Despite all the snobbishness, the Chelsea Flower Show is the greatest day for us gardeners, which is why ticket touts are demanding £1,800 a pop. It’s like a cross between a village fete with knobs on and a fashion show for plant lovers. 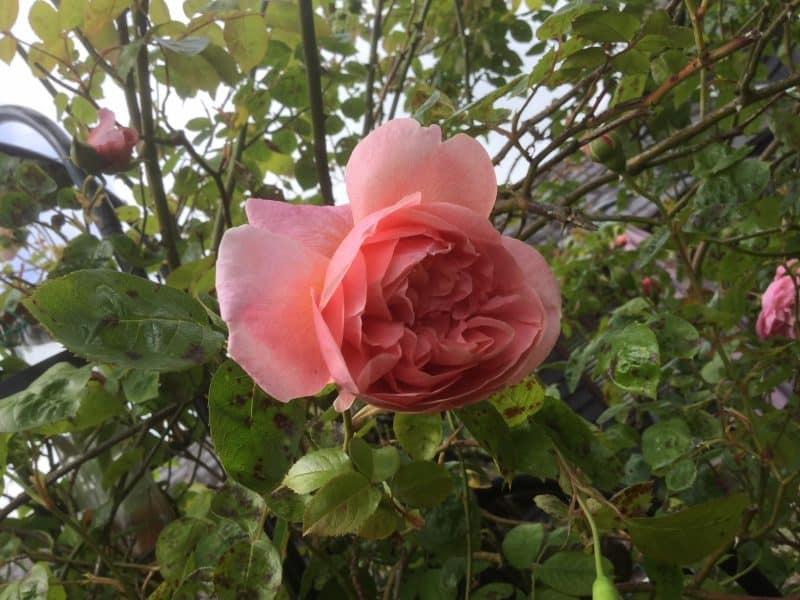 Proudly erect: The Anita Bush Rose is named after ME!

This truly is my time after all the years of hard graft. They’ve even named a rose after me! The Anita Bush Rose is a titty-pink climber that reeks of gin and cider. It has more than the usual number of pricks. The leaf has fetching black spots, which remind me of an acne-covered toyboy I once met in Felixstowe.

I’m expecting to meet Her Majesty The Queen at the opening ceremony and I just know she will want her gardeners to copy my landscape with its fetching car tyre atop a plastic compost bin. My sponsor is Suffolk County Council Refuse Collection Department. 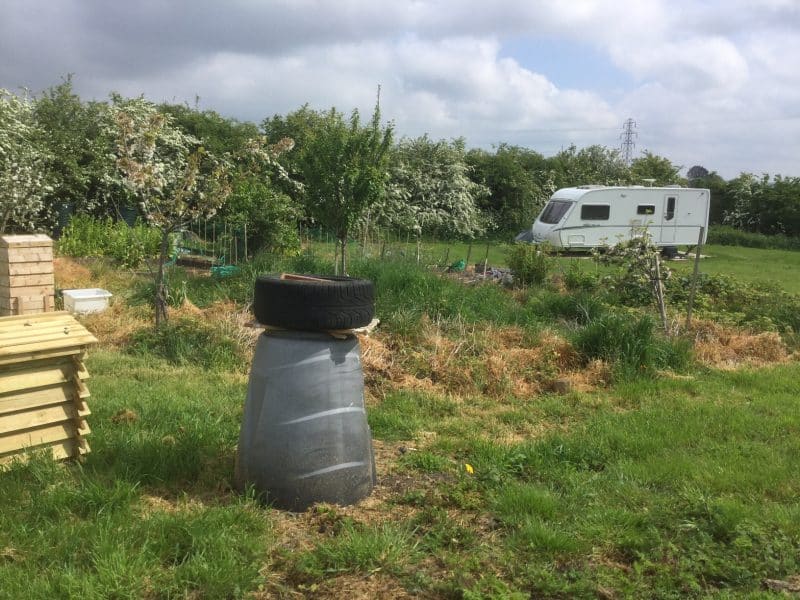 For some reason the organisers have hinted that I might want to visit the day after the Queen, or not turn up at all as they didn’t want me to get too tired and emotional. How thoughtful of them!

Sadly, they weren’t impressed by my suggestion of taking my pink wheelbarrow full of prosecco so I could enjoy a good old drink with Her Maj.

I think their aloofness is based on jealousy, especially when they saw my avant-garde water feature: a wrinkly old hose dangling softly as it trickled into my butt. Just look how marvelous it is… 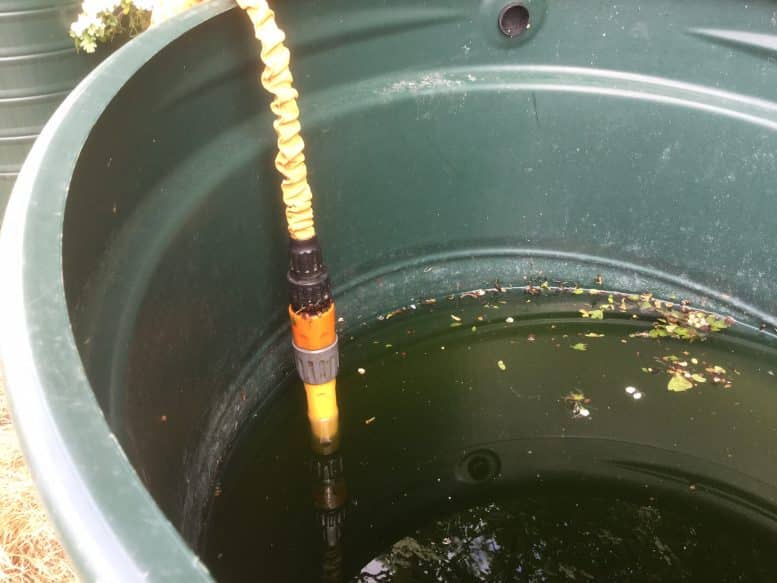 Golden shower: my special water feature will help me win Gold at Chelsea

I’m not sure where the caravan in my prize-winning landscape came from, but apparently there are ten more of them, complete with tarmac laying kit, heading this way down the A14.

If you’ve never been to the Chelsea Flower Show, here are my tips. Simply book a hen party with an Ipswich coach company (they’re completely au fait with high-pressure hose clean-ups) and each take a rucksack of Adnams, Aspall’s or Champagne, depending on your budget, and plenty of Walker’s Cheese and Onion crisps – plus perhaps a shrimp paste sandwich and a Penguin for the journey. By the time you get off the coach you will be pished enough to fayshe the crowdzhe queueing at the turnshtiles and get through shecurity. Cheers, Squire!

There is a certain look you need to follow. Men wear Arthur Daley pale shoes, a pink shirt and a navy jumper wrapped round their shoulders like a scarf with arms.

Women wear floral skirts and sensible shoes and many of them carry baskets. BASKETS! Anyone would think they are going shopping with Miss Marple. And if I had a pound for every straw hat, I would have enough money to buy a jug of Chelsea Pimm’s with a borage flower floating on the top like a poo that won’t flush.

They are all PASHionate about delphiniums or alliums and can’t stand common-or-garden Busy Lizzies or marigolds growing down a path.

Gnomes are banned at Chelsea as are real-live beehives, in case someone gets stung on their posh lardy-da arse.

Some of these people actually sound like they are speaking in italic Latin plant names, like Pretensius Twattius. And they delight in barging in on us commoners as we head back for the coach, laden with souvenir mugs and Busy Lizzies. I have been to the show by train on the final day when they sell everything off as cheap as pommes frites. But I got some rude looks on The Tube with my Wisteria, plum tree, tray of lobelia and a couple of big erect peonies in my hand.

If you are lucky at Chelsea, you might see a really rare specimen…like a person under 50.

The best thing I ever saw there was a REVOLVING summer house, which would make you feel like a star at the London Palladium. You could turn it to face the sun, or get in the shade…or whizz it round to aim your empties towards the wheelie bin or a passing vagrant.

The show is full of marquees (which I call tents just to annoy them) and the fragrance inside is magnificent, especially the sweet peas (urinus reliefium). They were nearly as potent as the chemical Aldehyde C-11 (undecylic) which you get in “natural” perfume!

Talking of sweet peas, I once had to queue for half an hour at the show’s ladies toilet. Eventually out came Camilla, wafting her straw hat. She said: “One had better give it five minutes..”

My gold-medal garden has raised many eyebrows and is more talked of in horticultural circles than the 1959 exhibit by The Times, called The Garden of Tomorrow and featuring a radio-controlled lawn-mower, or James May’s 2009 one made entirely of Plasticine. Cock!

My Lady Garden can only be beaten by the arty Authentic Urban Garden With Piss-Stained Mattress and Broken Fridge On Gravel, sponsored by Frosty Jack’s Cider (£2.99 for three litres from all good grocery departments).

My only downfall at the Chelsea Flower Show this year was when the wind blew my floral skirt up. Apparently the judges weren’t impressed with my dried arrangement.

* Plant some marigolds along the path.

* Pinch out the tops of your fuchsia to encourage it to grow bushier.

* Stake your lupins and delphiniums.

Answers to your problems

* Mr A M from Lowestoft: I’m sorry to hear about your drooping Monkshood. You may need to tie it to a stick while it regains its strength.

* Kerry Ann: I will deal with your topiary and small trunks in a feature soon, and would just urge you to make sure you keep on top of your privets, and send a photo for my male readers.

* Vivian H: I confess I am no expert at Brazilian gardens but I do believe that you need to run your mower along each side of the lawn, leaving a nice landing strip down the middle.

Have a lovely week!