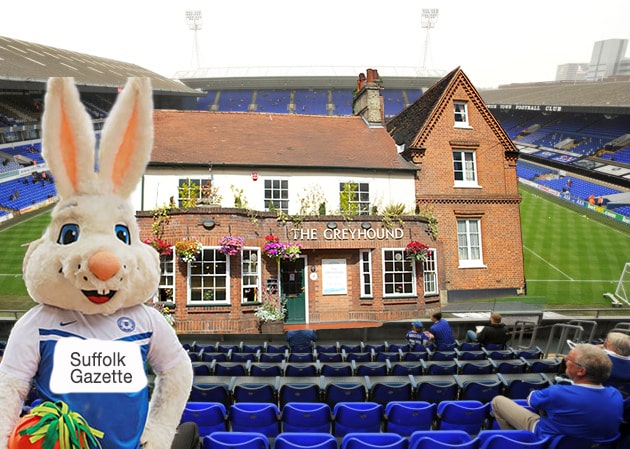 Popular Ipswich pub The Greyhound is bidding for the naming rights to the Ipswich Town stadium, it has emerged.

If successful, the deal will see Portman Road being renamed as The Greyhound Stadium.

The news comes on the day that the club unveiled Magical Vegas as its new shirt sponsor, and confirmed they were considering a sponsor for the stadium name.

As regular readers will be aware, The Greyhound is the corporate HQ of the Suffolk Gazette, and it is believed the deal being considered by Town includes naming rights of the ground’s toilet facilities as ‘The Suffolk Gazette’s Crap’.

Ipswich Town bosses were tight-lipped about the naming rights negotiations, but an executive close to the deal said fans would welcome the move.

“The Greyhound Stadium is perfect because the team have been going to the dogs for years.

“It is likely that Crazee and Bluey, the popular Suffolk Punch horse mascots, will be replaced by a giant bunny who will sprint along a track around the pitch in The Greyhound Stadium.”

Supporters were keen on the idea of the new name. Lorraine Fisher, 34, said: “If it means season ticket holders can get a free pint of Adnams in the Greyhound in Henley Road, then brilliant.”

But we can reveal the Greyhound is not the only corporate giant looking at giving their name to Portman Road, and the latest betting sites in the UK are compiling odds as we write.

Others brands in the frame include Horlicks, Andrex and Anne Summers.

“That makes sense, as the Ipswich Town squad is either asleep, shit or getting f*cked every week,” one fan suggested.