Donald Trump scraps visit to Suffolk over cost of shed 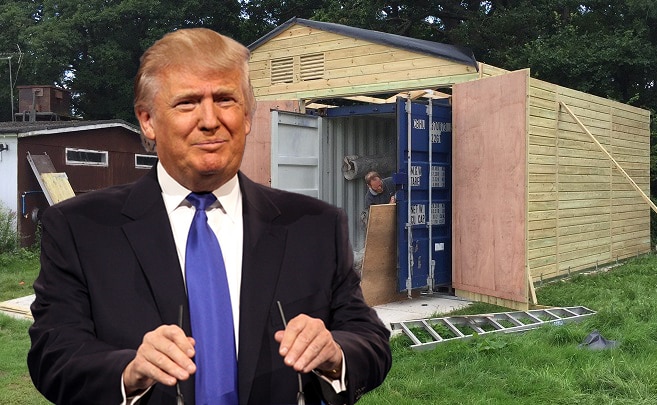 United States President Donald Trump has cancelled his official visit to Suffolk – blaming the cost of a deal for a farmer’s field.

He had been due to official open a new shed next to an American airbase in Lakenheath in February.

But he Tweeted overnight that the deal for the shed, built on land purchased from a local farmer, was way too high.

“Reason I canceled my trip to Suffolk is that I am not a big fan of the Obama Administration building a new shed in an off-base location for $12,000. Bad deal. Wanted me to cut ribbon – NO!”

The American air force, which has been based at RAF Lakenheath since 1948, needed a new storage facility because conditions were cramped within the base perimeter.

They wanted somewhere to house waffles, and so the US administration negotiated with local pig farmer David Cameron, who agreed to sell a field next to the base for $12,000 – including the provision of a new shed (seen being built in the photo at the top of this story).

But despite being gleaming new, Trump was so angry with the cost that he scrapped his visit to Suffolk to open it.

However, locals insist this is just a cover story, because there were huge protests planned.

Lorraine Fisher, 34, who is a spokesperson for the Suffolk Young Farmers, said they were furious over how Trump had been running the base and criticising visitors.

“He is not welcome here, and had he come to open the shed, there would have been huge protests.

“We had already provisionally booked two mini-buses to take us to Lakenheath, and painted snarky slogans on signs, like ‘Down with this sort of thing’.”

“It wasn’t even Obama who negotiated the new shed. It was George Bush,” a Washington insider said.

There was also concern Mr Trump did not want to go running through a wheat field with Theresa May to see the new shed.