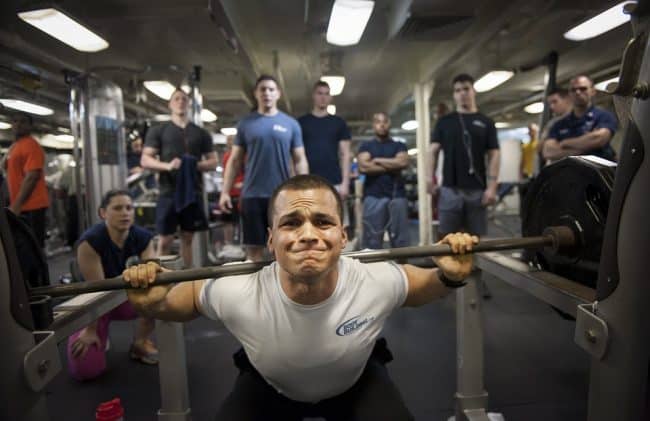 A keep fit fanatic’s testicles EXPLODED after his vain attempt to lift more weight went terribly wrong, it has emerged.

Scott Wells, 24, was left screaming in agony and covered in blood after the horrendous accident in his Ipswich gym.

He had been trying to impress his mates by lifting 150 pounds (68 kilos) – 15 more than he had managed before.

But he strained so much that both his testicles exploded in his shorts.

An ambulance was called and paramedics stemmed the blood loss before taking Mr Wells, a car mechanic, to Ipswich Hospital.

Doctors were unable to save his testicles, and informed him he will never be able to have children.

A witness at the Mr Muscles gym said: “I have never seen anything like it. This bloke fancied himself a bit and was bragging to his mates that he could beat his personal best.

“He loaded more weight onto the bar and then went for it. He was really struggling, going red in the face – and then it happened.

“There was a sort of loud popping, he dropped the bar and collapsed on the floor, rolling around in agony.

“I suppose it serves him right for showing off.”

A member of staff at the gym said: “The ambulance guys said when you strain too much, one of two things can happen – either your rectum becomes prolapsed or your testicles explode. Not in women, obviously.

“Unfortunately for Mr Wells, it was the latter. We do not expect to see him here for a while.”