Man tried to get wife eaten by bear

An evil Suffolk man who planned to get his wife killed by a brown bear while on holiday in America has been jailed for ten years.

Once deep inside the forest, he planned to attract the attention of the fearsome local bears before running off, leaving his wife as a defenceless steak-and-human snack.

But his horrific scheme, which would have allowed him to cash the £150,000 life insurance policy he tricked Freya into taking out last year, was foiled at the last minute.

A hunky American man camping nearby heard Freya’s screams as she ran through the forest being chased by a mother bear and two cubs.

Clint Jefferson, 27, managed to intercept and fend off the hungry bears with pepper spray, forcing them to retreat.

He then guided terrified Freya back to her hotel at Bass Lake 25 miles away, where they discovered the meat in her backpack – and Steve Lennox at the hotel reception calling cops with a false missing person’s report. 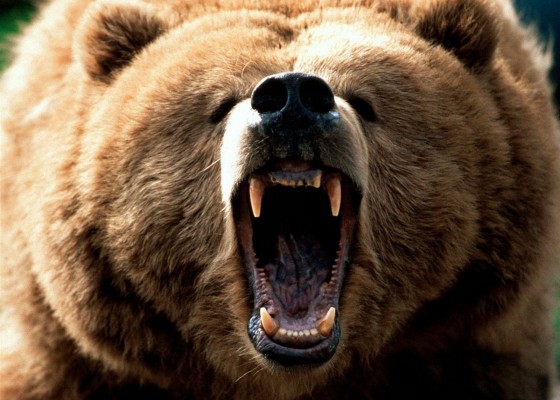 He was held by Clint Jefferson and burly kitchen staff until the police arrived.

At first he pleaded his innocence under questioning, insisting he had packed the meat for a nice BBQ treat. But he finally admitted he wanted his wife dead to get his hands on her life insurance.

Lennox, 39, a builder from Woodbridge in Suffolk, had taken retail assistant Freya. 38, on the “dream holiday” to California to celebrate their fifteenth wedding anniversary.

She was present in court in Fresno, California to see her ex husband jailed for attempted murder and breaking an old local law of feeding the bears by leaving a sneaky trail of bacon to attract them.

Afterwards, tearful Freya told a hushed press conference: “I can’t believe what he did. I hope he rots in jail.”

She said she believed Lennox came up with his scheme after watching a Yogi Bear cartoon before going to work one day.

“He must have been planning it for a while,” she explained. “It just goes to show you never really know someone.

“But I’ve had the last laugh. I’ve sold our house and moved to America to live with Clint.”

Meanwhile, there is another incident of Released bears eat Norfolk family in Thetford Forest