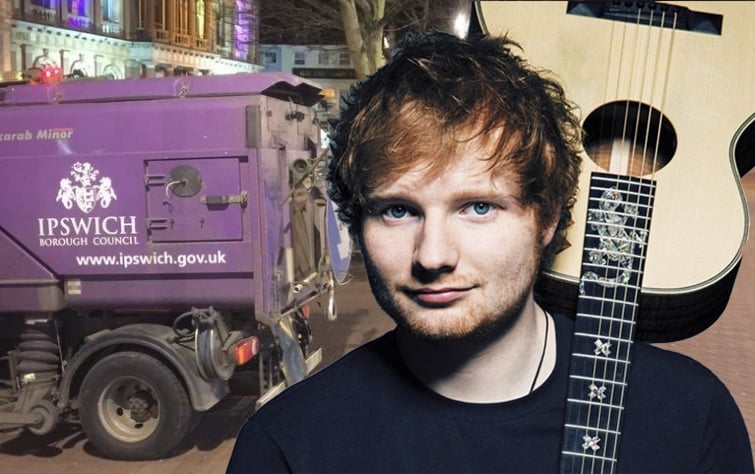 The secret songs that Suffolk superstar Ed Sheeran has written about Ipswich can be revealed today for the first time.

We were shown the compositions just days after the singer revealed he had written them and could make a biopic of his life.

Ed, who was raised in nearby Framlingham, played some of his first live gigs in Ipswich pubs when he was an unknown.

Now he has written about the town, and the songs show the rest of the world just what it is missing.

Pound Shops On Every Corner

The Road To Nowhere (remake of the 1980s Talking Heads hit)

16 Years In The Championship

Beggars Belief (Got Any Spare Change?)

Ed told the Times recently that he had this collection of songs about Ipswich, and that as he was in early discussions about a biopic of his local upbringing.

Now he had the material for a soundtrack.

Residents say the song titles appear to have captured the nature of the town perfectly.

Lorraine Fisher, 34, said: “We all think Ipswich is a sh*thole and it seems Ed Sheeran agrees.

“Me and my mates can’t wait for him to publish these songs – it could be the best thing to happen to Ipswich for years.”

A pal of Ed’s confirmed: “He has been writing songs about Ipswich for a long time.

“He lived in luxury in the posh market town of Framlingham 15 miles away – and life in Ipswich is so different in every way.

“It fascinated Ed when he was younger and provided this creative spark.”

Fans are now eagerly awaiting news of a possible biopic, which Sheeran said would be a like “8 Mile meets Notting Hill”.