A fascinating book about the devastating 1840 Norfolk Dumpling Famine is heading for the top of this year’s Christmas best-sellers list.

Suffolk author Derek Trotter has uncovered new evidence about the horrific famine, which wiped out tens of thousands of Norfolk peasants and sparked the war with Suffolk which, like that between North and South Korea, is still not “officially” over.

Mr Trotter, 73, of Lowestoft, has pieced together new claims that it was undercover agents from Suffolk who caused the famine by introducing a virus that prevented the dumplings from growing. 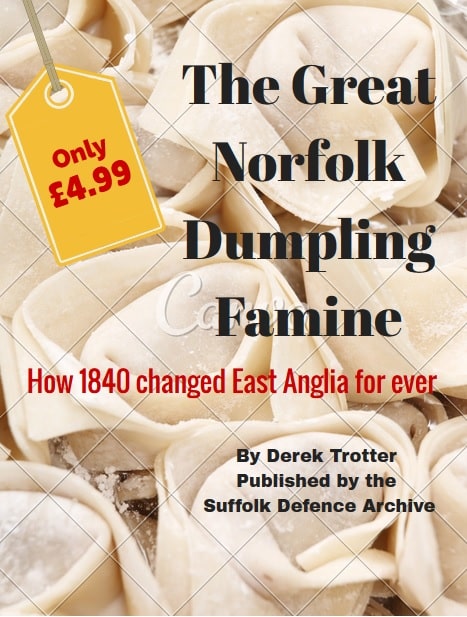 Upsetting: book reveals full horror of the great Norfolk Dumpling Famine of 1840
The 1840 dumpling crop failed across the whole of Norfolk, leaving entire villages and even small towns with no food supplies.

Rather than starve, and in desperate attempts to escape violence and hardship, tens of thousands of Norfolk peasants began trying to cross the border into wealthy Suffolk from March 1840.

But guards refused entry, sparking skirmishes that escalated quickly into full-scale conflict, with pitchforks and shovels used to awful effect by both sides.

Those so-called Dumpling Dustups began the fierce hostilities that remain between Norfolk and Suffolk today. The war has never been truly declared over, and fights continue in the borderlands and when the counties’ two football teams meet up.

Mr Trotter said: “It took years of research, but my book will for the first time reveal it was Suffolk dirty work that caused the famine.

“It tells how the peasants watched in horror as their dumpling crop failed in front of their eyes, causing social unrest and eventually war with Suffolk.

“The book then details how a scientist from Cromer came up with an antidote for the dumpling virus, and how crops were able to recover from 1841 onwards – but not before 37,000 Norfolk people died.”

Mr Trotter’s book, published by the Suffolk Defence Archive, is available from all good book shops, and some bad ones, priced at a very reasonable £4.99.