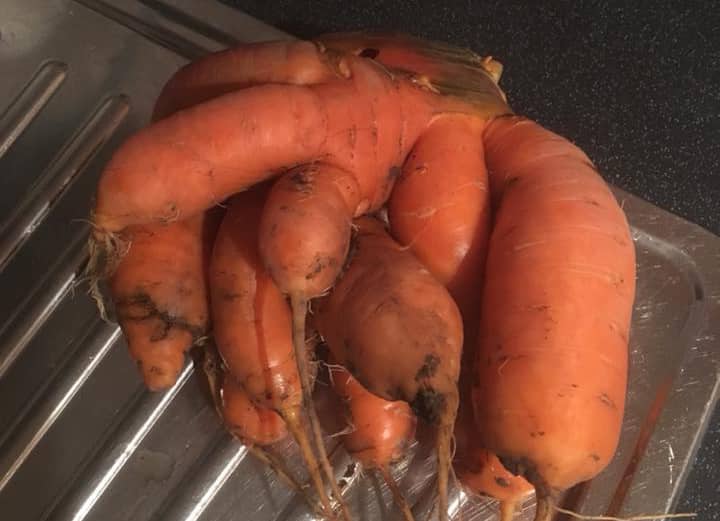 Fears are growing that Norfolk farmers are creating genetically inbred carrots and selling them on Suffolk’s supermarket shelves.

Shoppers around the county have noticed weird, mutant carrots appearing in the vegetable aisles.

Now Trading Standards agents have concluded the inbred carrots are being produced on the cheap in Norfolk.

They traced a consignment of offensive carrots to a smallholding near Downham Market run by Bubba Spuckler.

“We found he was interchanging the seeds from the same carrot family and this was producing mutant carrots.

“While these vegetables can be eaten, they do cause widespread offence in more worldly-wise areas like Suffolk.”

Mr Spuckler, who lives on his farm with his sister and their eight children, denied any wrongdoing.

Chasing our reporter and photographer off his property while waving a pitch fork above his head, he shouted: “I’ll make you squeal like a pig!”

Further official investigations, which were also run by the Ministry of Agriculture, confirmed the practise of inbreeding carrots was widespread on Norfolk farms.

Agent Mark Swain said: “Within days we discovered two more farms where these unsavoury practises were going on.

“One was run by Billy Bob Spuckler from near Hunstanton, who is apparently the brother and father of Bubba Spuckler.

“Another was an industrial-scale production unit near Yarmouth managed by Tammy Spuckler, who is a mother, sister and Great Aunt of Bubba.

“It has turned into quite a difficult job cracking this network of dodgy farmers making vegetables on the cheap.”

An executive at Waitrose said they had begun marketing the mutant veg as an “organic, ancient variety reintroduced by artisan East Anglian producers”.

“Normally we can get away with this sort of thing because our customers will believe anything labelled as ‘artisan’. But even they were horrified that these are, in fact, genetically inbred carrots from Norfolk.

“We have now removed them from the shelves.”

Shopper Lorraine Fisher, 34, was disgusted. “These carrots should never have come to Suffolk. They should stay in Norfolk where people like to keep things in the family.”