Joy as lorry overtakes another lorry in under a mile

There were widespread celebrations across Suffolk last night when it emerged a lorry driver had taken LESS THAN A MILE to overtake another lorry on a dual carriageway.

Baz Greening, 54, was driving his Scania truck when he pulled out to overtake a DAF lorry – yet despite a slight incline, he still managed to complete his manoeuvre inside five minutes and in less than a mile.

Car drivers normally have to wait ages for lorries to pass each other, with some seemingly spending endless miles neck and neck between 50 and 60 miles per hour.

Meanwhile, hundreds of frustrated car drivers stack up in the fast line behind them, unable to pass.

But those who sighed or cursed when Mr Greening pulled out ahead of them on the A14 outside Ipswich soon burst into spontaneous applause when he was clear of the other lorry before Claydon.

News of the amazing piece of driving spread across social media like wildfire – and now Mr Greening, of Diesel Road, Stowmarket, is being hailed a hero.

He told the Suffolk Gazette: “I’m a bit embarrassed about all the attention. It could have happened to anyone, but luckily it was me. I’d got a previous personal best of overtaking in two miles, but to get down to one is a great feeling.

“Drivers have been high-fiving me in the street, hoping other lorry drivers can follow suit. They tend to get a bit peed off when lorries go head-to-head and the one in the slow lane fails to slow down a little bit.”

The Mayor of Ipswich, Kenneth Branagh, is now thinking of giving Mr Greening the freedom of the borough. 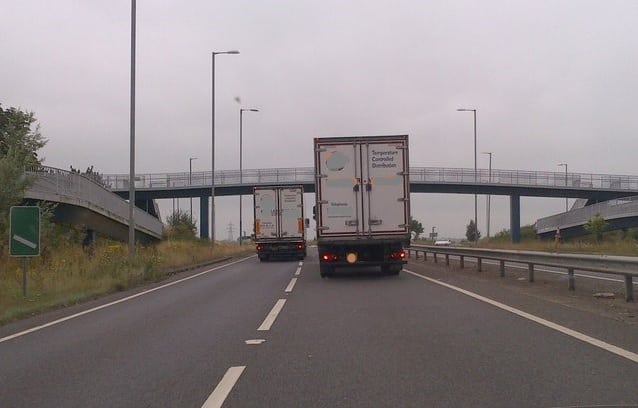 Some councils have banned lorries from overtaking each other on busy sections of dual carriageway. But Suffolk County Council chiefs now believe a new generation of fast-overtaking lorry drivers might solve the problem.