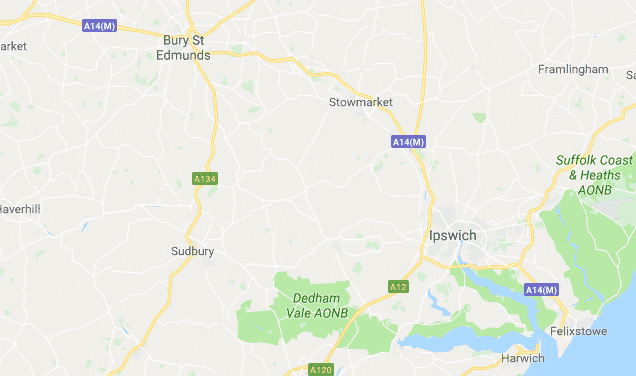 Google Maps has leaked news that the A14 in Suffolk is being upgraded to motorway status.

Newspapers such as this have been under strict embargo not to publish the revelation until next week – but Google has jumped the gun.

Anyone looking at Google Maps today (reprinted above) will clearly see A14(M) in blue along the length of the A14 from Newmarket in the west to Felixstowe in the east.

Motorists who are fed up with constant delays and poor surfacing on the A14, currently only a dual carriageway, will be delighted by the news.

Plans to be announced officially by the Department of Transport next week include making the A14 three lanes throughout, and forcing lorries to stick to the inside lane from 7am to 7pm each week day.

The upgrade, which will cost £790 million and be completed within two years, will bring the first ever motorway to Suffolk, so often seen as a transport backwater.

It will reduce travel time and also help the local business infrastructure.

Felixstowe Port, in particular, will benefit from the news.

Suffolk motorist Lorraine Fisher, 34, said: “This is fantastic news – we have suffered on the A14 in Suffolk for too long. Turning it into a motorway is very exciting and will bring huge benefits to local people and businesses.

“Now we can only hope they will also upgrade the A12 through the county – and even the A140 to Norwich, so that we can get away from Norfolk as quickly as possible.”

Chris Salamé, spokesman for the Department of Transport said: “We can not comment on this until next week.”

Last motorist to use driving gloves lives in Suffolk