Even we’re fed up with the rain, insist ducks

Grandparents across Britain will be forced to look after their grandchildren every weekend for free – or face a £3,000 fine, it has emerged.

Theresa May will push through the draconian new law if the Conservatives win next week’s general election.

But while mums and dads will welcome the news, grandparents are furious that they will be taken advantage of. 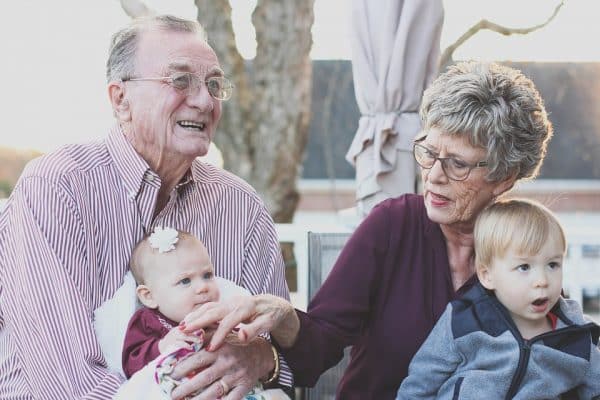 Upset: The Lyalls with Esther and Archie

“Why should we be forced to do more?” said Mr Lyall, a retired pilot. “This is slave labour – we don’t get paid to look after the little sods, so while it’s nice to see them once in a while, being stuck with them every weekend is not on. We have a life, too.

“And to be fined if we refuse is simply ridiculous. It’s like living in a police state.”

But parents Thomas and Charleen Lyall, both aged 35, said the new law was an excellent idea, and denied it was just a brash attempt by Mrs May to win more middle class votes.

Thomas said: “We need a break from the kids at weekends so we can go to the farmers market, go to the pub and to the cinema. If grandparents refuse to take the kids for free then of course they should be fined.”

Mrs May confirmed the plan in a brief interview with the Suffolk Gazette while she toured an agriculture machinery factory in Beccles.

She said: “I am very clear that what this country needs is a strong and stable family group, and to enter negotiations about babysitting with a firm and decisive strategy.

“That is the clear choice we face: strong and stable babysitting under the Conservatives, or a coalition of weekend chaos led by Jeremy Corbyn.”