St Edmundsbury Cathedral is launching a marketing campaign in Russia to cater for unprecedented interest in British places of worship.

Russians are flocking to the UK to see our “very high spires” and big clocks, and to drop in on ancient sites like Stonehenge.

The cathedral in Bury St Edmunds in Suffolk, which originates from the 11th century, is keen to cash in on the extraordinary popularity of big churches among Russian tourists.

And the strapline for the campaign highlights that it “rarely snows in Suffolk”, making tourist conditions ideal.

Two keen Russian tourists told yesterday how they went to see Salisbury Cathedral but were put off staying in the city for too long because it had snowed and there was slush on the ground. 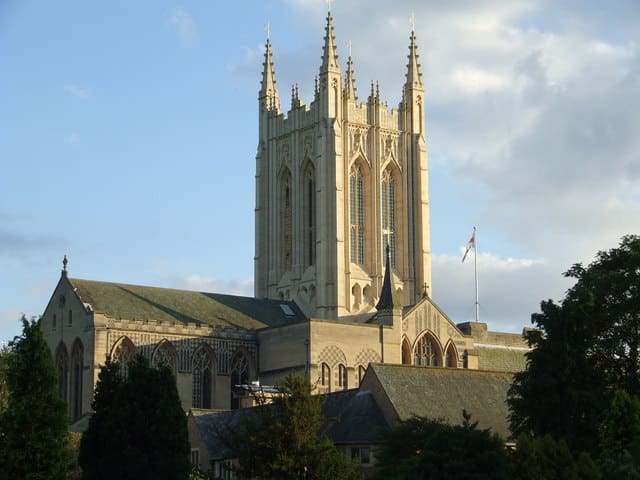 Good lord: Russians love an English cathedral like St Edmundsbury
Neal Cushion, who works in the marketing department for the Bishop of St Edmundsbury and Ipswich’s office, said Russian tourists could visit the town without getting cold.

“We have a perfect climate in Suffolk. We understand our friends in Russia are used to tropical conditions, so it’s no surprise they don’t want to hang around in places like Salisbury, which is known for Arctic-like weather.

“There is a big market for pairs of burly men who look like they should be nightclub bouncers, coming to the UK, staying in a low-profile east London hotel, and visiting a cathedral before flying home the same day.

“We want to make sure we seize some of that market and show the Russian people just what St Edmundsbury Cathedral has to offer.

“We have a Norman Tower that they will find particularly interesting.”

Mr Cushion said an online marketing campaign in Russia was well underway, and that an advert had been placed in Pravda, the local newspaper.

“We’re already seeing lots of shifty men from Russia, poking around the cathedral. They are very nice people who clearly care about their appearance as they always have a bottle of perfume with them.

“They say this is opening new doors for them.”

It’s not the first time Russian visitors to Suffolk have been in the news. The Suffolk Gazette revealed recently how a Russian submarine was caught spying on Felixstowe.