A Russian submarine has been spotted lurking off the Suffolk coast as Vladimir Putin continues to provoke the west over troubles in the Ukraine.

Defence chiefs fear the menacing sub is spying on Felixstowe as the Russian regime attempts to understand what makes a great British holiday resort so popular.

British spymasters believe Putin is envious of Felixstowe’s international reputation as a summer millionaire’s playground – and wants to use covert intelligence to help build a copycat resort back home on the Black Sea.

But officials warned the submarine has technically “invaded” Britain after entering UK waters uninvited – and added an accidental collision with one of the huge container ships from Felixstowe Port was a very real danger, sparking a major international incident.

A Ministry of Defence insider told the Suffolk Gazette: “Since we mothballed our fleet of submarine-hunting Nimrod aircraft, Putin has been sending his vessels into our waters in increasing numbers, knowing we can not pick them up.

“It’s a dangerous game of chess as he goads us over our opposition to his aggressive expansionist policies in the Ukraine region.”

The submarine, believed to be a third-generation ballistic-missile-capable Austin Maestro class, was first spotted by visitors sitting in Felixstowe at the Felixstowe Port viewing area.

They saw a mysterious periscope appearing from the waves about two miles offshore, rotating backwards and forwards by 45 degrees as if surveying the Felixstowe coastline.

One tourist, Lorraine Fisher, 34, managed to take this exclusive photograph before the submarine dived and glided silently under the waves again. 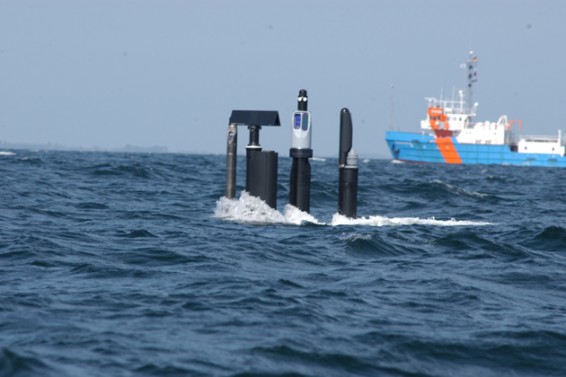 Ms Fisher, from Woodbridge, said: “I was in the car with my elderly mother enjoying a cheese sandwich when I spotted the sub. I couldn’t believe it – but I luckily managed to take the photo before it disappeared from view.

“It’s terrifying to think the Russians are getting so close to us and there’s seemingly nothing we can do about it. I’m not surprised Putin wants to understand why Felixstowe is such a popular holiday resort, but I worry that he has positioned a sub in the middle of our very busy shipping lanes.”

The Suffolk Gazette understands that MI5 has now sent undercover agents to the Felixstowe area to begin a counter-espionage operation.

They are believed to be staying in one of the high-class caravan parks near the seafront, and splitting up during the day in order to maximise efforts against the Russians.

One will spend time at the glorious Mannings amusement park, one of the world’s leading leisure facilities that rival Disneyland, while another is stationed on the internationally-renowned crazy golf course on the promenade, a course that attracts the world’s best golfers.

Meanwhile, a third agent will patrol the beautiful pier (the bit still open to the public), while the last is said to be holed up in the resort’s exclusive leisure centre, which is used by Felixstowe residents with beautiful bodies.

“Putin needs to be put in his place,” said an MI5 source hiding behind a newspaper with eye holes cut out. “Felixstowe has worked hard for centuries to earn its reputation as one of the world’s leading leisure destinations. If the Russians think they can just come and steal our secrets, then they have another thing coming.”

Dive, dive, dive with a cuppa

Don’t fret about Russia, enjoy a hot drink in a Suffolk Gazette mug from our partners at Dirty Old Goat. They make splendid gifts and will be enjoyed every day for years. FREE UK delivery.