Police and park rangers caught one of the famous Norfolk Broads prehistoric monsters today as they continued preparations for the new holiday season.

The huge Sixfingesaurus was spotted munching duckweed on a quiet stretch of water near Wroxham, and is believed to be one of around 50 specimens still at large.

Rangers preparing the Broads for the Spring called in assistance from Norfolk Police in order to lasso the creature around its neck.

They then hauled it on to the riverbank before securing it and placing it in a carriage on a special train bound for London Zoo. 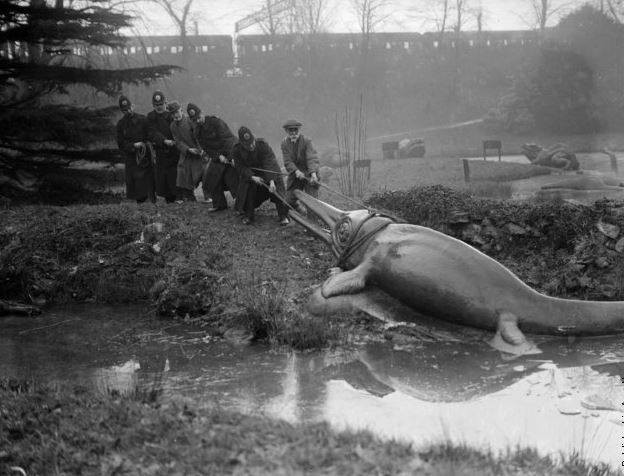 The Sixfingesaurus can weigh five tonnes and grow up to 30 foot long, and even though they will not harm humans, they are a danger on the Norfolk Broads because holiday boats have been known to collide with them.

It is a close relative of a similar prehistoric monster found in Wales, the screeching Daidaidelia.

A spokesman for Norfolk Police said: “We were called to Wroxham to help catch a Sixfingesaurus, the first to be removed from the Broads for two years. The creature appeared to be in good health and is now in its own special habitat at London Zoo.”

Anyone who sees one of the creatures in the wild is urged to call the rangers as soon as possible, but not before taking a picture and sending it to the Suffolk Gazette.

55,846FansLike
9,837FollowersFollow
February 17, 2017
Previous article
Mick McCarthy: an apology
Next article
Cow reveals it does not lay down because it is about to rain

Have a staycation and spend £5,000 visiting Southwold or Aldeburgh