The police chief and mayor of Felixstowe have clashed publicly over how to deal with fears that a shark is stalking waters off the Suffolk resort.

Chief Inspector Martin Cody wants the beaches closed after a windsurfer’s board was bitten by what experts believe was an eight-foot shark.

But Mayor Larry Warne, who has been a Felixstowe Town Councillor for 23 years, insists there is no danger and likely no shark at all.

He told concerned residents at a packed public meeting in the Spa Pavilion last night: “We do not have a shark problem. The damage caused to windsurfer Christopher Mills’ board was likely caused by a boat propeller.”

Chief Cody interrupted the mayor. He stood up, pointed angrily at him and said: “This was no boat accident!” He then stormed out of the meeting, turning only to add: “You remember this conversation, Mr Mayor.”

Astonished members of the public looked back at Mayor Warne for reassurance, and he calmed nerves by insisting Felixstowe beach would remain open to windsurfers, fishermen, and families.

“Felixstowe is open for business!” he declared with a broad smile. 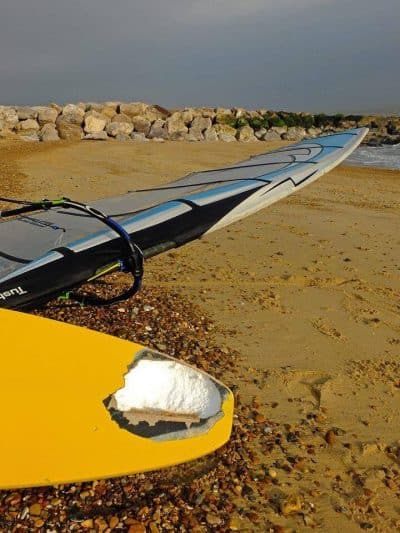 Meanwhile, Suffolk police were last night investigating apparently unrelated reports that a woman had gone missing while swimming in the North Sea off Jacob’s Ladder, just half a mile up the coast from where Mr Mills’ board was damaged.

A police spokesman said: “We are aware a woman went missing last week while swimming in the sea, two days before the windsurfer incident.”

She has been named locally as Chrissie Watkins, but the mayor’s office insists her disappearance is purely a coincidence and she may have simply left town to visit relatives.

If you happen to be accosted by a shark, this is how to survive a shark attack.

* EDIT: Local fisherman hired to catch and kill the shark.

** EDIT EDIT: The shark was killed, but it did not end well for the fisherman.