He asked intelligence officers to draw up plans which would allow British soldiers to hide in fields “behind enemy lines” across East Anglia.

And one of their recommendations was seized upon by Churchill, who ordered 2,000 panto cow costumes to be made at a clothing factory near Lavenham in Suffolk.

Teams of two soldiers were trained to stand in fields all along the Suffolk and Norfolk coastal areas, where Germany was expected to launch its land invasion during World War Two.

They had to learn to wander about slowly, pretending to eat grass while using binoculars and a camera poking out of the udders. 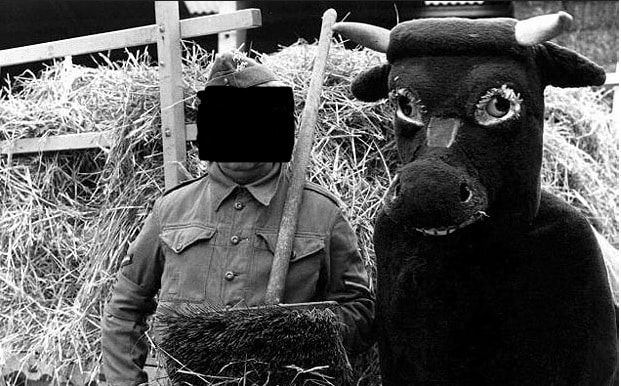 But the grand project was scrapped after three of the pantomime cow crews were chased and mounted by randy bulls – two near Orford in Suffolk, and one at Hopton, Norfolk.

The training also sparked bust-ups between soldiers, with none of them wanting to be the back-end of the cow.

One memo in the papers, written by a sergeant major in the Suffolk Regiment, states tersely: “No man wishes his head to be in close proximity to another’s rear end for a period of hours. Especially in the hot summer months.”

The farcical anti-Nazi spy plans were revealed as part of a batch of wartime files released on January 2 by the National Archives.

Papers show the difficulties encountered with the training, particularly the problem of sex-mad bulls, forced Churchill to scrap the programme just nine months into the war.

Instead, local regiments were urged to recruit vicars and elderly ladies to act as spies because invading German forces would never suspect them.

The story is the biggest war-related scoop uncovered by the Suffolk Gazette since a German soldier was found alive and well hiding in a Suffolk forest last year.

Suffolk historian Colin Farrahar told the Suffolk Gazette: “Using pantomime cows to spy on the Germans sounds farcical now, and the records do not make clear if Mr Churchill was entirely serious with the plan.

“But serious or not, the costumes were made as directed because I have seen the inventory record from the factory at Lavenham. What is not clear, however, is if any of the soldiers were seriously hurt by the bulls. I have looked through various regimental diaries and found no mention of these incidents – but I suppose they were meant to be top secret.”

55,370FansLike
9,936FollowersFollow
January 5, 2016
Previous article
Old lady is victim of ‘balance’ prank
Next article
Fungus the Bogeyman is from Norfolk

Neville Chamberlain returns from Germany, claims ‘peace in our time’