North Sea fish including cod and plaice were hurled 15 miles inland by the huge waterspout which appeared off the coast this weekend, the Suffolk Gazette can reveal.

They were plucked from the water and sucked hundreds of metres into the sky when the unusual spout formed off Thorpeness on Saturday afternoon.

Similar to a tornado, the waterspout then twirled the fish around hundreds of times before sending them whizzing through the air all over the Suffolk coastal area. 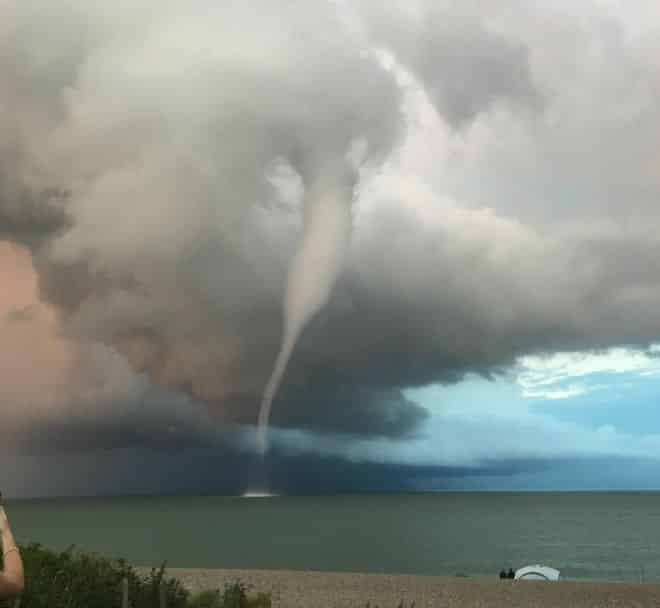 Suffolk Gazette reader Roger Waters was mowing his lawn in Rendlesham, near Woodbridge when he was alarmed by a large fish landing at his feet.

He said: “I was baffled. I’m about ten miles from the sea and there was no reason for a fish to arrive. But there it was, gasping at my feet. I assumed someone had thrown it from a passing car, but then I read about the waterspout and realised it had been thrown here by that.

“It must have been my lucky day as me and the wife had a lovely fish supper.”

There were similar reports of flying fish all over parts of east Suffolk, with a plaice landing on a road in Framlingham, a whiting hit a lorry on the A12 near Glemham Hall, while another cod surprised a cricket team by plummeting onto the village green at nearby Brandeston.

Video shows the spout off Thorpeness

Weather experts said a waterspout is essentially a tornado over water and can have devastating consequences.

Suffolk Gazette spout expert Lorraine Fisher, 34, said: “Thankfully no small children were swimming nearby or they could have been thrown into the air and deposited somewhere near Halesworth,” he said.