Detectives today launched a double murder hunt after the badly-beaten bodies of two Leprechauns were found beneath a double rainbow in a Suffolk field.

Police fear gang warfare has broken out among the Leprechaun community, which is out gold-hunting during the current outbreak of rare autumnal double rainbows.

Leprechologists claim the unique conditions, with rainbows breaking out in record numbers, have brought an unprecedented influx of the red-bearded dwarfs, legendary for their miserly habit of hoarding gold.

But experts warn that the close proximity of too many Leprechauns can often lead to tribal-related violence as the current high price of gold proves too tempting. There is evidence, they say, that a ruthless underground criminal network, known as Our Kidda, has surfaced in Suffolk recent weeks.

The bodies of two unnamed Leprechauns were discovered under a double rainbow near Framlingham yesterday. The pair had earlier been photographed by a tourist as they hunted the pot of gold just hours before their deaths. 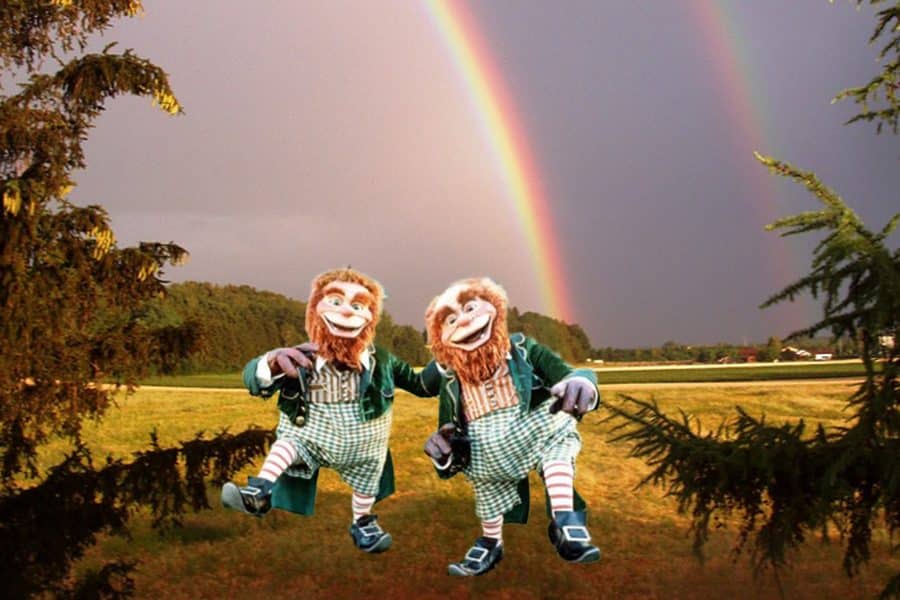 In happier times: the two dead Leprechauns hunting for gold just hours before being beaten to death

Prof Seamus O’Charlatan, dean of Faculty the Special People Studies at the Polytechnic University of Stradbroke, said: “There is a mythology that Leprechauns are cheerful and smiley people – in fact because they continuously live in the rain they are miserable and angry misers at the best of times.

“Today’s deaths represent the latest episode in a disturbing upsurge in inter-clan violence. With all these double rainbows about in Suffolk I can anticipate there will be rampant greed and increasing savagery in the Leprechaun community. People in rural areas should be on the watch out and try to prevent outright gang wars breaking out.”

Suffolk police confirmed two men of diminished stature had been found dead in a field outside Brandeston.

Inspector Rod Knobkerry read a short statement but declined to take questions. He said: “We can confirm two male individuals have been found deceased and appear to have died from multiple blunt-force injuries consistent with repeatedly struck with sticks.

“Two empty cauldron-like containers were also found at the scene.”

The two Leprechauns were found by shocked dog walker Danny Dennington. He told the Suffolk Gazette: “It was an unbelievable scene. It looked like an explosion in a cushion factory with bits of green cloth and clumps of red hair all over the place. It must have been quite a set to.”