Suffolk Police are close to making arrests following an exhaustive 1,151-year investigation into the murder of Edmund, the last king of East Anglia.

The Martyr King, 28, was attacked by a gang of drunk Danish tourists, who riddled him with arrows before chopping off his head and throwing it in the woods.

But the culprits were never caught and were believed to have fled abroad, probably on a longship back to Denmark.

Police appeals for witnesses were unsuccessful, but new DNA evidence suggests the attackers have family members still living in Copenhagen.

A spokesman for Suffolk Police said: “On Friday, November 20, 869, at 2.34pm, a 28-year-old king was murdered. We are liaising with our Danish colleagues and expect to make arrests in the coming days.” 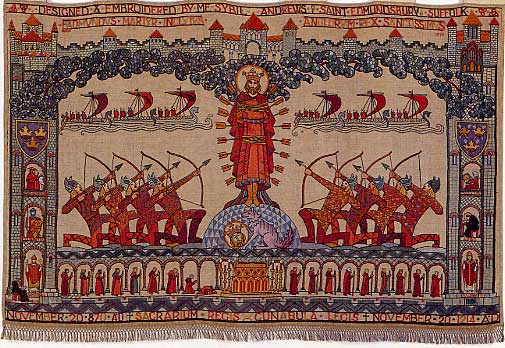 The news will be a huge relief to residents of Suffolk, Norfolk and parts of Cambridgeshire, who have been without a King of the Angles ever since King Edmund died.

He was savagely attacked by members of the ruthless and violent Viking gang for refusing to renounce his belief in Christ (see startling CCTV picture of poor old Edmund being tied up and shot with arrows).

Once his head was found, it was reunited with his body and eventually buried at Bury St Edmunds abbey – a significant clue to the origin of the West Suffolk town’s name.

Local vicar The Rev Evan Elpuss said Edmund was a brave king. “He stood up for his religion in the face of these drunk louts from Denmark, but it cost him his life. News of arrest is most welcome indeed.”

Edmund was regarded as the patron saint of England in the Middle Ages but has since been usurped by St George, who was known for killing dragons close to his Turkish home.

55,844FansLike
9,830FollowersFollow
November 20, 2020
Previous article
The biggest win in blackjack history
Next article
I’m no bully and anyone disagreeing gets a Chinese burn, warns Priti Patel