Six factors to consider before getting your new smartphone 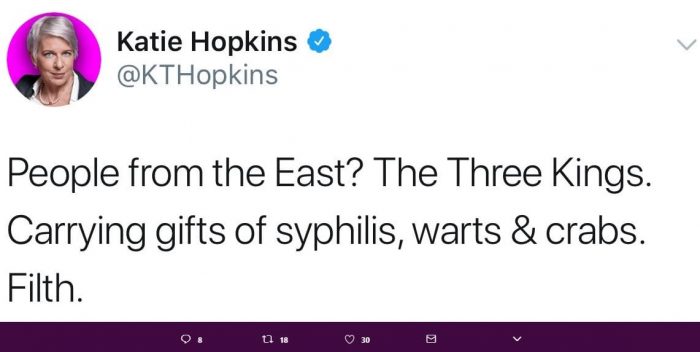 Motormouth Katie Hopkins has declared war on Suffolk by claiming people in Lowestoft are riddled with syphilis, warts and crabs.

Whilst catching crabs along the Suffolk coast is indeed easy, and often pleasurable, the other conditions are less than complimentary.

The “celebrity” broadcaster made the sensational claim to her 823,000 Katie Hopkins Twitter followers (only a few less than the Suffolk Gazette) during a heated social media debate.

Her comments sparked a storm of protest from Lowestoft residents.

Dwayne Pipe, 26, of London Road South, said: “Who does Katie Hopkins think she is, slagging off our town and people like that?

“Not everyone here has syphilis and warts. Some just have your bog standard STDs. The filth bit is quite accurate, I suppose.”

Ms Hopkins is never far away from controversy. In a Suffolk Gazette column she attacked anyone with a foreign sounding name – and people who were fat (which seemed like another pop at Lowestoft).

While she clearly had Lowestoft in her sights, by declaring “from the East” in her controversial Tweet, nearby seaside town’s were eager to distance themselves from the crabs.

A spokesman for posh Walberswick said: “Everyone here has crabs. Often, once we have got rid of them, we go and get them again. But that’s none of Katie Hopkins’ business.”

Crabs can even be caught just up the road from Walberswick, in Southwold. However, there are no other sexual health issues there, mainly because most residents are too old to get into any bother.

Ms Hopkins was unavailable for comment, mainly because we didn’t bother asking her.