Elvis Presley is alive and living in Ibiza

Elvis Presley is alive and enjoying his retirement in Ibiza, we can reveal today.

The King of Rock and Roll, who many have always claimed faked his own death, lives in a huge hilltop villa close to the pretty town of Sant Josep de sa Talaia, and had until recently enjoyed complete anonymity.

But a new hotel was built on the isolated road leading up to his home, and tourists have begun noticing the unmistakable figure of Elvis as he potters about.

The Suffolk Gazette flew to the sunshine Mediterranean island after a tip-off from a reader who was sure she had seen Elvis, who is now a sprightly 81 years old, wandering up the hill with some bread, fresh milk and frozen burgers.

Our Entertainment Editor Arthur Pint, who once saw Elvis perform live in Las Vegas, rented a villa close by and set about finding out if the numerous sightings could be true.

Astonishingly, within hours he had taken this picture of the man so many believe is Elvis Presley, confirming the star did not die on the lavatory back in 1977 after all. 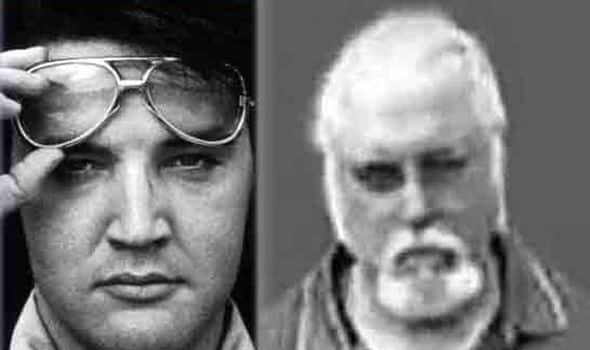 Pint said: “Elvis looks amazing. He is quite trim and is still getting about well. His hair is now grey and he sports a goatee beard, but his features are unmistakable.”

Locals have always suspected the man on the hill was Elvis. Pedro Alonso, 65, who spends his days watching the world go by at the Raco Verd bar in Sant Josep, paying with an Elvis wallet he bought on Amazon, said: “He moved in to the house on the hill during late summer in 1977.

“I remember it well because my father worked as a labourer when the property was built. In those days Ibiza was quiet and nobody took any notice of new people. There was a free spirit.

“But now the island is packed each summer with tourists from Britain and Germany, and the new hotel near the villa has meant the man in the villa has been exposed to more and more people.

“The older locals always knew who he was but respected his privacy, but now everyone has a smartphone and can take pictures. I’m amazed this has not come out before.”

Our man visited Elvis’ villa hoping for an interview that would go down in history as the greatest ever. Pint rang the buzzer by the electronic gates and a man spoke over the speaker in Spanish – but with a definite Deep South American drawl.

“Is this Mr Presley?” Pint asked. There was a tell-tale split second delay before the man replied: “No. Adios.”

Pint was not put off, and set about watching Elvis for a few days to get a sense of his lifestyle in Ibiza. One night he was amazed as Elvis set out in his black Jeep and headed for party capital of San Antonio. There he giggled as local Elvis tribute act Ibiza Elvis, whose tagline is “It’s Good to be The King”, performed at a bar. 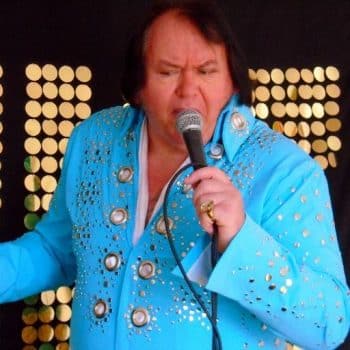 All Shook Up: Elvis enjoyed the tribute show
Elvis supped on a coffee and tapped his feet as the tribute show belted out hit after hit, including Hound Dog, Jailhouse Rock and Suspicious Minds.

Then he went to nearby Amnesia, the huge club where young tourists party the night away. On Saturday thousands were unaware they were in the presence of the most famous musician ever.

Elvis, dressed in a crisply-pressed white shirt and black trousers, stayed for over an hour soaking up the atmosphere before driving back to his villa alone. Clearly music is still a huge part of his life.

The next day our man watched as Elvis drove to the port at nearby Ibiza Town and climbed aboard a small boat which was to take him out to a luxury yacht. As he sat down on the service boat, a passing tourist from Manchester said: “Nice boat, sir.”

And Elvis replied in English: “I love me tender.” 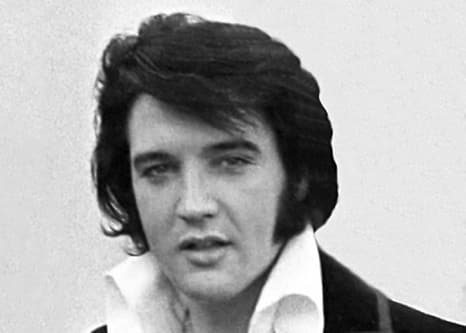 It is believed the superstar chose Ibiza because of the guaranteed weather and because in the 1970s, when he was supposed to have died at his mansion in Graceland, Memphis, the island was quiet with very few visitors.

But he would have watched dismayed as the island became increasingly popular with hundreds of thousands of visitors each month. He must have been surprised that no one had spotted him. Until now.

Revealed: Not all famous people died in 2016