Norfolk app warns if your date is a relative

Eagle with bad attitude and bears spotted at Minsmere

Extraordinary sightings of a large eagle and two bears at a Suffolk wildlife reserve have got birdwatchers and nature lovers in a frenzy of excitement.

The eagle, said to have “mahoosive wings and a bad attitude”, and the two bears were spotted at Minsmere, the world-famous habitat that features on the BBC’s popular Springwatch programme.

At first rumours of the rare visitors were scoffed at. But then wardens noticed the sightings were being chalked up repeatedly on ‘What’s About’ noticeboards used by enthusiasts to pass on information about which creatures they have seen.

One birdwatcher had even helpfully drawn a picture of the eagle, albeit with a strange long beak, on the board alongside normal entries like snipe, geese and coots. 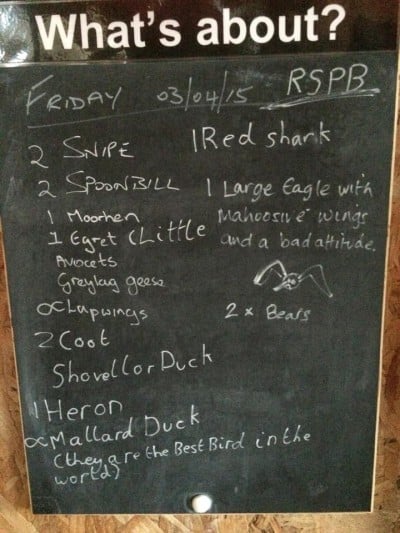 The eagle has landed. And so have the bears.
One keen twitcher said: “I’ve never seen anything like it. The eagle was indeed mahoosive, and was flying about trying to pinch people’s packed lunches. It’s that sort of attitude which gives eagles a bad name.

“Then I was amazed to spot the two bears playing about in the long grass. It was a lovely moment, and one I am unlikely to witness again.”

Experts say it is likely the Bald Eagle, so called because it has no feathers on its head, was swept off course by the wind from its normal habitat in Birmingham. It is not to be confused with a Bald Eagle Shaver.

But they are more baffled by the playful bears taking up residence on the Suffolk coast.

Bear expert Michael Bond told the Suffolk Gazette: “Sadly this may be an unfortunate result of the Paddington Bear film that was released last year.

“Many kids demanded their own bear for Christmas, and even though we always say a bear is for life, not just for Christmas, some of the poor things got dumped before January was over.

“This pair appear to be doing a good job of looking after themselves in the wild. But you must remember they are more used to feasting on marmalade sandwiches rather than catching shrews and fish.”

A spokesman for the RSPB, which runs the Minsmere site close to Dunwich, said: “We’ll be trying to catch the bears and find them a good home.

“As for the eagle with the mahoosive wings, we expect it to stick around for a while. But once it gets warmer it will likely head back to Birmingham.”