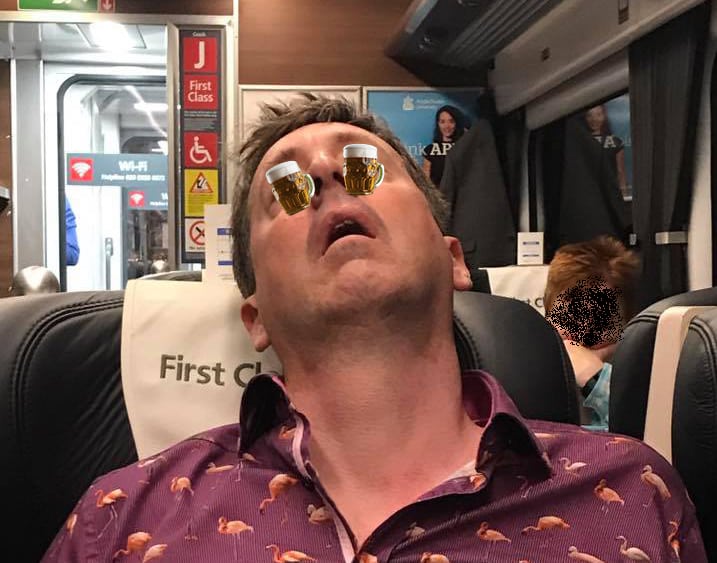 A tipsy commuter was so sleepy on his train that he ended up on the rails for FOURTEEN hours.

Richard Williams (tipsy) had a boozy Tuesday afternoon with colleagues in London before catching the 8pm train from Liverpool Street, which should have got him into Ipswich at 9.10pm.

But Mr Williams, 50, fell asleep within minutes of settling down in his first class seat, and slept through his stop in Suffolk.

He woke up in a panic as his train pulled up at the end of the line – 40 miles away in Norwich at 10pm.

“I had to hang around for half an hour to get the train back so I could get off at Ipswich,” he explained. “So I had a pint at a pub next to the station.”

Tipsy Mr Williams got back on the train, but promptly fell asleep again and slept through Ipswich once more – all the way back to London!

“I couldn’t believe it. By the time I got back to Liverpool Street it was gone midnight, more than four hours after I left in the first place, and then there were no trains back to East Anglia until 5.30am!”

Mr Williams said he had to wander about Liverpool Street Station, and had two McDonald’s meals to pass the time.

“I had to ring home and explain what had happened, but I don’t think the missus believed me.”

However, things got worse for financial trader Mr Williams.

He was so tired after waiting up all night that he fell asleep as soon as he got on the 5.30am and, with no one else on the train to wake him up, he ended up in Norwich once more.

Now it was 7.30am and Tipsy Mr Williams was stuck in Norwich and due at work two hours later.

“There was no way I had time to go back to Ipswich to get washed and changed. So I had to get the train straight back to London and go to work.

“I was in a bit of a state, and probably looked a bit rough.

“It was the 14-hour train journey from hell.”

A spokesman for the Greater Anglia train company said: “At least he got his money’s worth.”