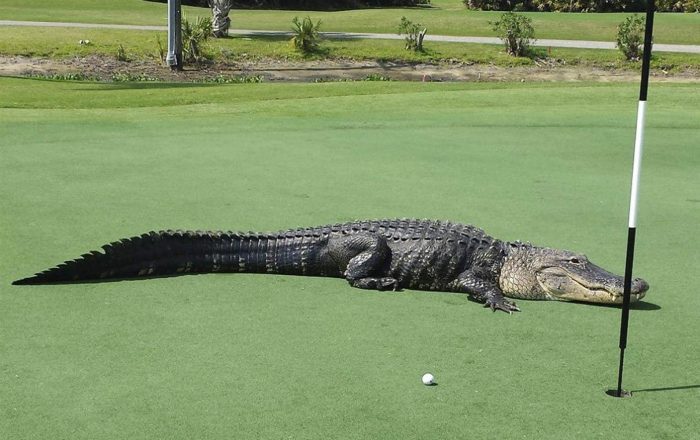 Golfers have been warned to beware of a four-foot alligator that has set up home at a Suffolk course.

The reptile has been spotted several times at Ipswich Golf Club in recent weeks and has now been photographed (above) by member Graham Perkins.

Experts have been called in to catch the alligator, which has not shown any aggression towards players so far, but have yet to find it.

It is believed to have made its den in the water that makes the par-three, 135-yard 15th hole such a challenge.

Suffolk Police have also been informed as it is believed the reptile was an unlicensed pet that was released into the wild after growing too large for its home.

Alligators are a common sight on golf courses in Florida, but none have ever been seen in the United Kingdom before now.

Ipswich Golf Club was established in 1895 and its website lists wildlife as an important feature of course management.

But there is no mention of a killer alligator lurking in the waters of the 15th hole.

A club insider said: “Some of the members think the course should be shut until the alligator is caught – but they are harmless unless approached.

“It certainly makes the 15th hole a slightly trickier challenge.”

Graham Perkins told the Suffolk Gazette: “I had just played my tee shot on the 15th and got my ball to land on the green, seven feet from the hole.

“I was admiring it with my playing partner, Steve, when we saw the alligator climb out of the water and wander on to the green without a care in the world.

“It wasn’t after my ball but seemed content to just laze about in the sun. We watched for ten minutes – at a safe distance – and I took the picture before it clambered back to the water.

“There is lots of other water around the estate, so it may be the reptile does not live on the 15th, but elsewhere.”

Wayward golfer has saved £500 in lost golf balls since lockdown