Golfers at one of Suffolk’s poshest courses have been warned about a “large brown coloured Burmese cat” which is stealing golf balls from the 14th hole.

A genuine letter on Aldeburgh Golf Club’s noticeboard highlights a local rule that can be employed to replace the ball with no penalty.

But while that maintains fairness on the fairways, there seems to be no attempt to catch the cat burglar who is clearly terrorising members.

It seemed an ideal mystery for our investigations unit to solve. At first they failed to find a fiendish feline on the course, but they did soon track down other cats they hoped could help them.

Near the Moot Hall they bumped into Trevor, who was drinking alone at the popular Mill Inn pub. 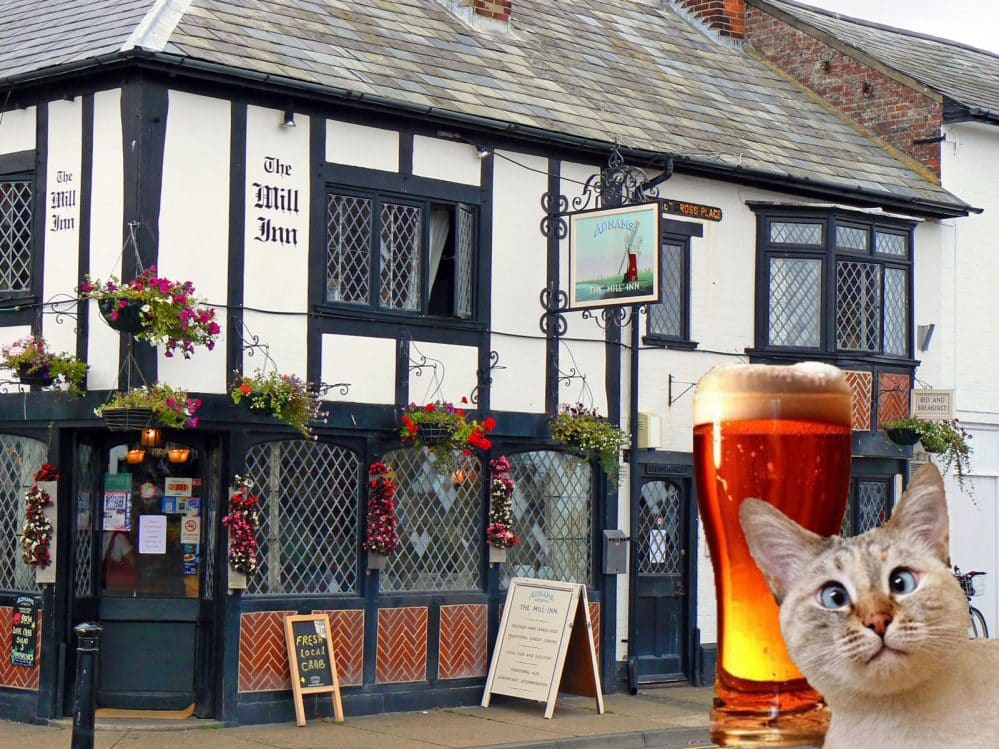 Clever Trevor: so drunk he could hardly stand on his own four feet

Trevor was on his fourth pint of Adnams when we found him, and was having trouble seeing straight. “I don’t even know what golf is,” he said in a loud and increasingly agitated voice. “Did you just spill my beer?”

He was not making much sense and demanded to know what our cameraman was looking at. Thankfully, the landlord stepped in before there was a cat fight.

We left promptly and headed for the beach, where many people were enjoying the afternoon sun. Lazing about on a deck chair was Colin, who was ginger and therefore risking terrible sunstroke. 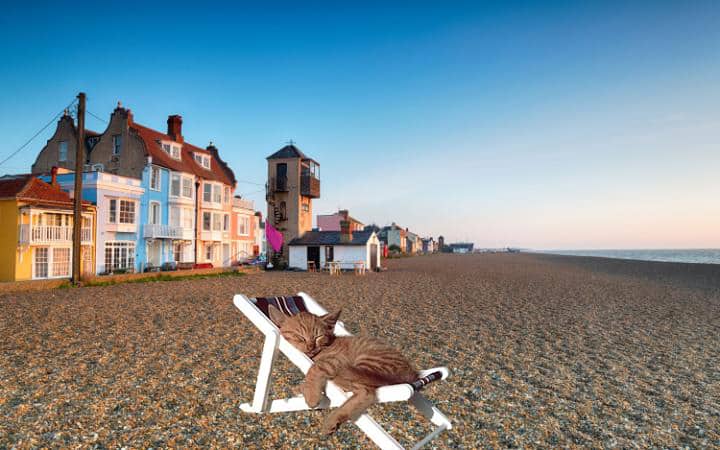 Cat nap: Colin catches forty winks but should have worn a hat

Colin did not believe he had heard of the trouble on the golf course, but he did warn us against trying to talk to a boss-eyed cat called Trevor. “He’s trouble,” Colin said, unaware we had already come within a whisker of fighting him.

Further up the beach was Delilah, who was busy guarding the famous scallop sculpture created by Maggi Hambling in honour of Benjamin Britten. 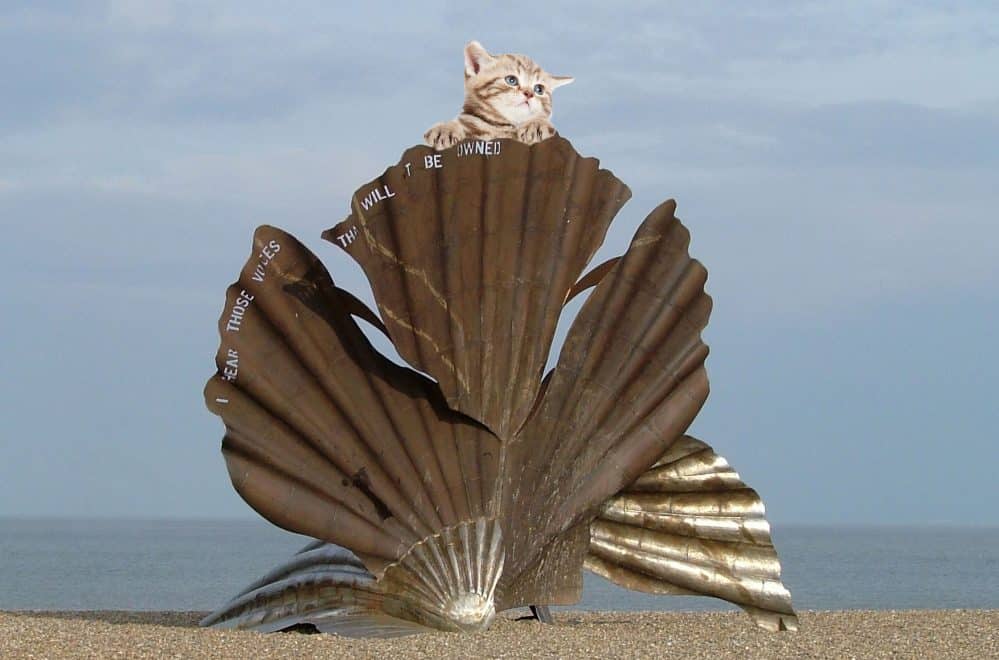 Why, why, why? Delilah on the scallop

“Have you come to deface the scallop?” Delilah demanded as we approached. “Of course not,” our Editor said as the team stopped in its tracks, before adding: “Surely nobody would do such a thing?”

“Well, it’s not unusual,” replied Delilah, who was originally from Wales but moved to Aldeburgh with her owner, a Mr T Jones.

Delilah had not even heard of Aldeburgh Golf Club, but advised us to try Larry, who would likely be getting his lunch from the famous Aldeburgh fish and chip shop.

Sure enough, we found Larry leaving the premises with his grub. 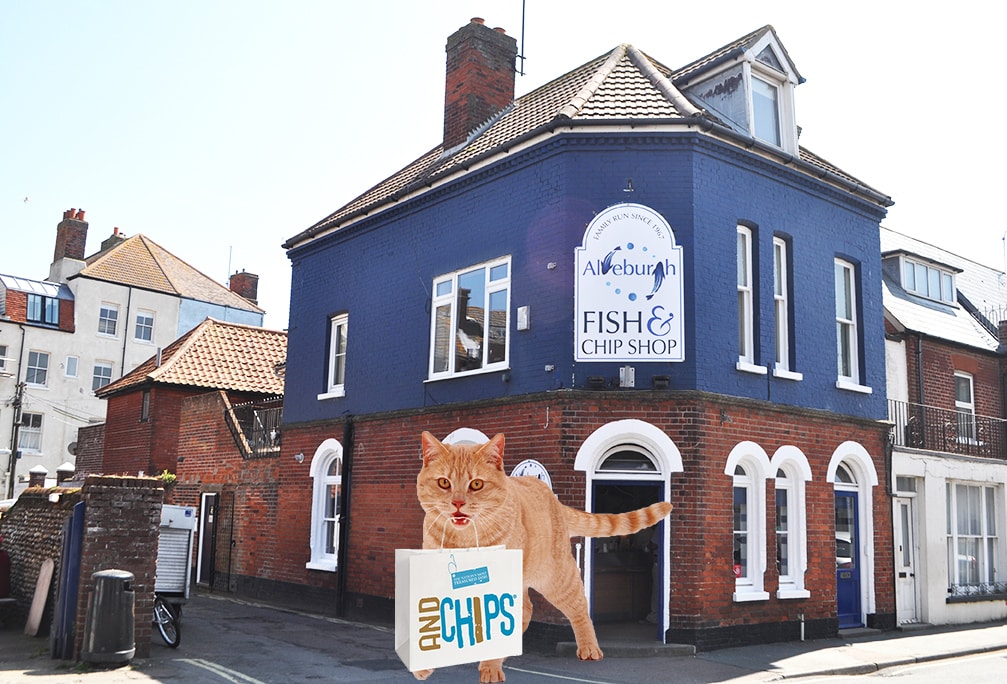 To our delight, Larry said he knew the cat burglar – and would even take us to him… so long as we paid for his meal. It was a small price to pay for exposing the Aldeburgh criminal mastermind, and our team would claim it on expenses anyway.

After finishing his food and having a wash (he did not offer the Suffolk Gazette team a single chip), Larry led us to the 14th hole at the golf course.

He made a quick phone call and within minutes a shifty moggie appeared with a swagger. He was indeed a large, brown-coloured Burmese cat, and the fact that he was wearing a mask to disguise his identity, and had a large basket of golf balls, led us to believe we had found our man. 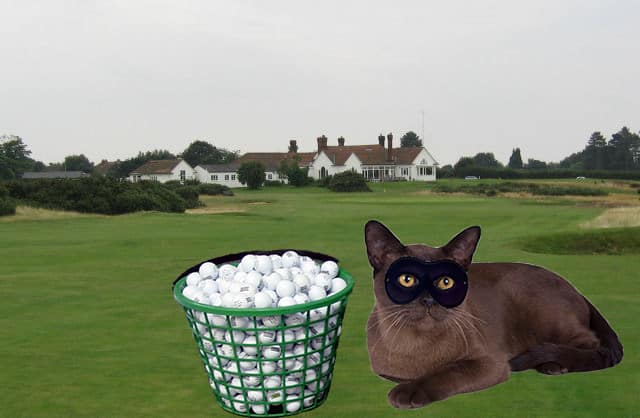 “It’s just a bit of harmless fun,” said Dave (not his real name). “I pinch a ball and then watch from the rough as a human wearing ridiculous clothing gets very cross.”

Dave said he now had a collection of over 450 golf balls hidden in his shed, but admitted he had no idea what to do with them.

“They are not much fun,” he said. “They just sit there. But I’m always on the lookout for more.”

In return for posing for this exclusive photograph, our reporters promised not to turn Dave in to Aldeburgh Golf Club secretary Bill Beckett.

But our dossier is available for Suffolk Police should they wish to investigate further.