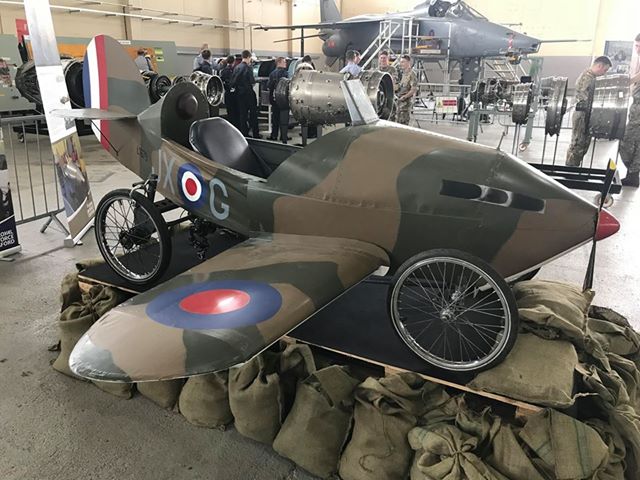 Buyers at an international arms fair were unimpressed with the first jet fighter Britain has produced after Brexit.

The event in Jordan, attended by representatives of countries looking to invest billions in their defences, showcased Britain’s entry in the aircraft section.

Dubbed the Squitfire, the jet is all Britain’s beleaguered defence industry can afford.

It can boast speeds of up to 75mph and reach heights of 45 feet before the pilot begins to black out from the effort of pedalling.

But what makes it a laughing-stock is the fact that firepower is limited to the pistol kept in a cockpit pouch.

When up against the US Air Force F-16, or the Eurofighter Typhoon (top speed 1,550mph), the Squitfire is a sad reflection of modern-day Britain.

Defence expert Lorraine Fisher, 34, said: “Britain’s entry into the Jordan Arms Fair was embarrassing. The Squitfire is like something out of Dad’s Army and has no place in a modern air force.”

Norfolk-based defence manufacturer Colmans BAE is behind the Squitfire, the same company behind the equally useless Gentle Breeze fighter jet, which also flopped at an arms fair last year.

Unbelievably, Colmans BAE, which is based at Downham Market, was also behind the Raleigh Tank, which flopped when even the British Army refused to buy it.

A spokesman said: “I am afraid that post Brexit we cannot hope to compete with the Europeans and their Eurofighter.

“Our plane may not have all the bells and whistles, but it can fly, and that’s something to celebrate.”

An insider at the Ministry of Defence said: “People need to stop running Britain down.

“We have a fine tradition of building brilliant planes, ships and tanks for our armed forces, and nothing is changing after Brexit.

“It may look a little rough around the edges, but the Squitfire has some endearing qualities. I’ll be sure to let you know when I’ve found them.”

The RAF – Probably the best Airforce in the world