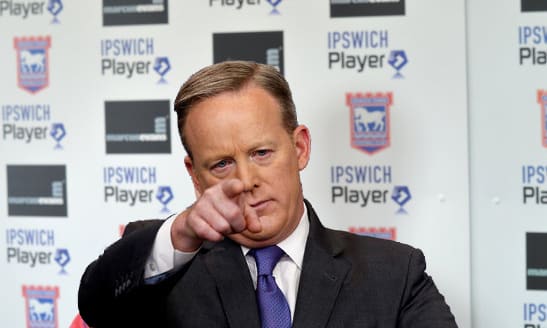 Mr Spicer, who caused controversy with his ill-tempered Washington press briefings, has already ruffled feathers in his opening meeting with journalists at Portman Road.

He quit his White House role unexpectedly yesterday as President Donald Trump moved to bring in a smooth new operator in his place.

But that opened the door for Ipswich Town, and Mr Evans is already seeing the benefits his new hire’s extravagant claims.

Mr Spicer told hushed Suffolk journalists today: “Season ticket sales have hit 24,000 and we expect to play in front of crowds of 27,000 this season,” he claimed.

“In fact, we will have the highest gates on record. Period.

“After we narrowly missed out on promotion last season, we have now spent tens of millions on new players, and next week we will unveil a £15 million new striker to replace Daryl Murphy, just like we said we would.

“Our goalkeeper Bartosz Bialkowski is not going to be sold, the Jonathan Douglas/Cole Skuse midfield pairing was out of this world, and we’ll be giving our youth players a real chance this year.”

Spicer saved some of his famous spite for journalists until the end of the briefing, when the Suffolk Gazette’s editor tried to ask a question about ticket prices.

“Suffolk Gazette? Fake news. It’s worse than CNN,” he said. “Mr Evans is clear there is no room for this Fake News Media anymore.”