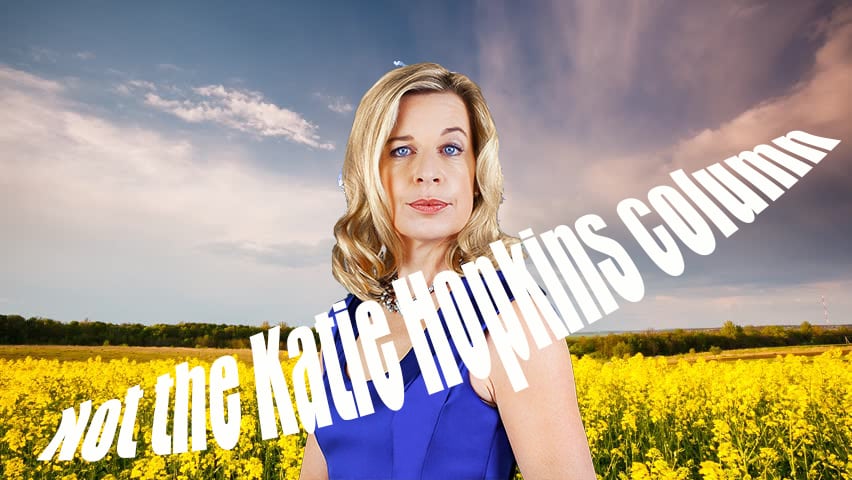 I wish I had stood in this election for the Katie Hopkins Party as I know I would have swept the board with my common sense and popular views.

Instead of taxing the rich, my manifesto would simply increase tax for anyone with a foreign name, including Irish, Scottish, Welsh and anything I can’t pronounce.

Many of you will know my view of fat people with their lack of discipline, stuffing themselves with junk food and foreign muck.

I would have brought in a law to put a set of weighing scales at every food bank. Anyone with an abnormal Body Mass Index would have to leave.

And why are they called food “banks”?

These people are so thick they don’t know how a bank works. It goes like this. On pay day, your money goes in the “bank”. And when you are a bit skint you go and draw some out.

Now food “banks” don’t work like that. The low-lifes who use them should pay in (deposit) on benefits day. Say a tin of Alphabetti Spaghetti, some tuna, a tin of Spam and some Ambrosia custard.
Then as the week goes on and they are short of money, they could draw one or all of the tins out.

Can you imagine me going to my bank, Coutts, and asking for some money I hadn’t paid in?

Anyway, I will just have to work on my manifesto for the next General Election, which will probably be in four years, or six months if Diane Abbott is doing the calculations.

I’m sorry you won’t all have a fascist candidate in your area. By next week we will know what we are in for. I will be giving the winning side the benefit of my advice on social care, immigration and the health service and of course will be keeping you all informed on the paper of record, the Suffolk Gazette. Happy voting!

Editor’s note: This column is not written by Katie Hopkins, even though she is apparently looking for a new newspaper column