An Ipswich grandmother today claimed Labour leader Jeremy Corbyn took her dead husband’s bike while on an election campaign visit to the town earlier this year.

Mrs Mary Dell, 83, a former nurse and now a resident in an old folks home in Bury St Edmunds, told The Suffolk Gazette: “My Bill passed away in the January so I put his bike away in our shed for safekeeping. It was only after Mr Corbyn’s visit in March that I noticed it had gone.

“The padlock had been cut off the shed door and the bike was missing along with our lawn mower and some of Bill’s tools. I immediately put two and two together and realised that Mr Corbyn must have done it.

“I even saw him riding a bike down his street the other day on television. It looked like Bill’s bike because it had two wheels and some pedals, but it seems he has painted it a different colour. Bill’s was red and Mr Corbyn has painted it blue, which is a bit ironic, don’t you think?

“I’ve never voted Labour and I never will to be honest, especially after this.” 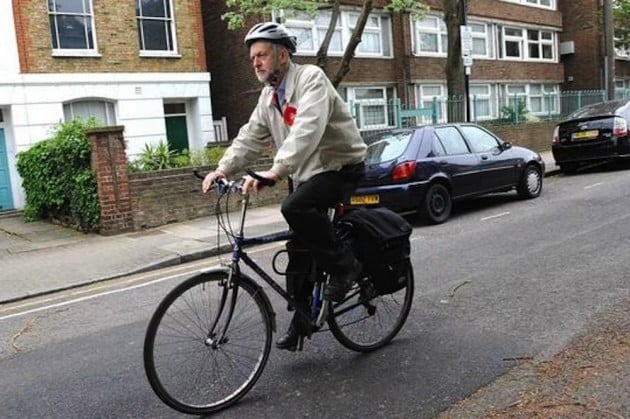 Jeremy Corbyn: I like to ride my bicycle (Photo, Twitter/@TrickyBee)

Mr Corbyn, who received surprise Labour leadership backing from North Korean leader Kim Jong-Un, who has a holiday caravan in Suffolk, last night strongly denied the allegation that he took a bike from a shed in Ipswich.

Speaking to reporters outside his home in North London, he said: “It’s absurd to suggest I had anything to do with the disappearance of this lady’s bicycle. I freely admit I may have climbed over her back fence to answer a call of nature, but I certainly didn’t lop off the padlock on the shed with bolt-croppers, nor did I take the bike, a hammer and bolster, a pair of mole grips and an olive-green Suffolk Punch lawnmower with detachable grass collector.”

Last night a Suffolk police insider said: “Of course Mr Corbyn did not take this woman’s bike. She must be mistaken.”

* To read more from this contributor, please visit Soz Satire.