Their festive displays have dazzled and delighted the people of Ipswich for years, but now two neighbours have appeared in court after coming to blows over who has the best Christmas decorations.

Barry Knight and Sam Allardyce, who live next to each other in Bolton Lane, began fighting on the street as allegations flew about the sabotage of an eight-foot blow-up Father Christmas and the crude vandalism of a huge flashing rooftop ‘Santa Stop Here!’ sign.

Retired Knight, 63, and fitness coach Allardyce, 54, pleaded guilty at Ipswich Magistrates Court to affray, while charges of criminal damage against both men were dropped.

The court heard how for 20 years each man had tried to outdo the other with increasingly gaudy Christmas decorations featuring huge Santas, reindeers and sleighs, thousands of lights and even carol music.

Both men accused each other in a furious confrontation in the street before they began trading blows in front of startled passers-by. Each suffered cuts and bruises but were not seriously hurt.

Mr Blom added that police intervened and the pair had since begrudgingly made up. 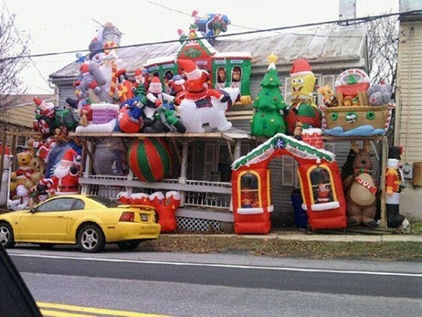 James Spicer, for Knight, told the court: “My client is ashamed of his actions. He has enjoyed putting up his Christmas display each year, but it became something of a competition with his neighbour.

“Every December they would put more and more decorations up, getting brighter, bigger and louder each year. Sadly the Christmas spirit seems to have deserted them this time because items started going missing or being tampered with.

“Mr Knight realises he has embarrassed his family and has offered to put up some extra decorations for Mr Allardyce as a peace offering.”

Allardyce’s lawyer, Hannah Fern, said: “My client would like to apologise to the court and to the people of Ipswich. He admits he stabbed the Santa because he assumed it was Mr Knight who wrote ‘Shat!’ on his roof.

“Mr Allardyce was so ashamed that he has moved temporarily to Sunderland in order to distance himself from further trouble. He does appreciate Mr Knight’s hand of friendship, and admits next year they will probably work together for a joint Christmas display.”

Magistrates ordered both men to carry out 20 hours of community service and pay £60 costs. Chairman of the bench, Russel Farquar-Harrisson said: “Let this be a lesson to you.”