Football’s coming home, but it has moved house to Russia 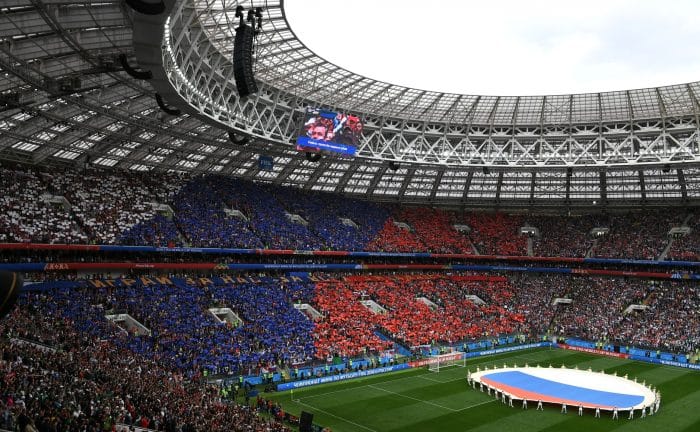 English football fans generally love a plucky underdog, from craving huge upsets in the FA Cup to getting behind Wales at Euro 2016. However, for a team so frequently underwhelming it is unsettling how infrequently England are considered an underdog. Rather, England contrive to find a way to exit the tournament before they have to play anyone too good. While it has spared us from quivering through a 7-1 pasting in a World Cup semi-final, it does leave us with a quandary over who to throw our slightly patronising underdog support behind. It is fair to say that nobody thought Russia would ever be a leading candidate to qualify for that role.

In fact, most people thought Russia wouldn’t even qualify from their group. When that group contains Saudi Arabia and an Egypt side who are apparently worse than Saudi Arabia, it’s not a glowing endorsement of the squad’s quality. Andrei Kanchelskis knows a thing or two about quality football, having played against some top sides when at Manchester United. The former Russia star considered this particular collection of misfits to be the worst Russian national side that he has seen in his lifetime. That’s not exactly what you want to hear when you’re about to grace the biggest sporting stage in front of your entire population, especially when your population is that vast.

Maybe the Russian coach, Stanislav Cherchesov, pinned Kanchelskis’ words on the dressing room wall to inspire his players. Paul Hurst stuck a predicted league table on Shrewsbury’s dressing room wall with the caption ‘we are rubbish’ underneath reflecting how critics deemed relegation inevitable. It worked for Hurst, so well that he landed the biggest job in football at Ipswich Town. Cherchesov may have to settle for winning the World Cup instead; Russia’s surprising run to the knockout stages saw them vanquish the mighty Spaniards (on penalties), although Betfair betting tips still place Russia behind a plethora of teams at odds of 22/1 to lift the trophy. Expectations have been defied, they scored five goals in one game and they’ve beaten Spain, yet still, they are unfancied: there’s your plucky underdog.

They are not without their characters in the squad. Football Manager legend Igor Akinfeev has become a target for derision since he palmed a ball into his own net in the last World Cup, earning the heartfelt sympathy of Rob Green. Yet, Akinfeev is showing why we shouldn’t judge someone on one World Cup, with his penalty shootout saves against Spain a testament to his resolve and skill. Sergei Ignashevich may be older than time itself and have the turning circle of a tree, but his return from international retirement is a feel-good story. Up front, Artem Dzyuba is the archetypal striker with ‘good feet for a big man’, while Aleksandr Golovin looks set to be the next Andrey Arshavin.

Perhaps the best story about Russia’s campaign so far comes in the shape of backup centre-back Vladimir Granat. In a game where Spain’s impotent passing for the sake of passing infuriated all of the footballing fans out there who enjoy it when teams move forward with purpose, Granat taught the world a footballing lesson. Granat came on to play an hour of football, in which he attempted four passes and completed zero. His performance was so steadfastly anti-Spain, as if he had been given tactical instructions by Gandalf before entering the fray. Yet they did not concede a goal while Granat was on the pitch, so there are some lessons here for budding superstars. Russia are very much the underdog, but they have embraced this status and cannot be ruled out.