A driver who posted photos of himself on Facebook reaching speeds of up to 35mph along the A140 has been jailed.

Justin Johnson filmed his speedometer reaching reckless speeds along the notoriously slow road, and at one point the needle was seen to hit 35mph.

Police said that sort of pace was more than double the speed achieved by most drivers who have to pootle along the busy A140 for miles on end.

One traffic cop told us: “It was crazy going that fast. We’ve never clocked anyone getting above 20mph on the A140 before. Mr Johnson would have got away with it, except he decided to film his recklessness and then brag about it on social media.

“His Facebook and Twitter posts included the photograph of his Audi speedometer touching 35mph – and that was all the evidence we needed to prosecute.” 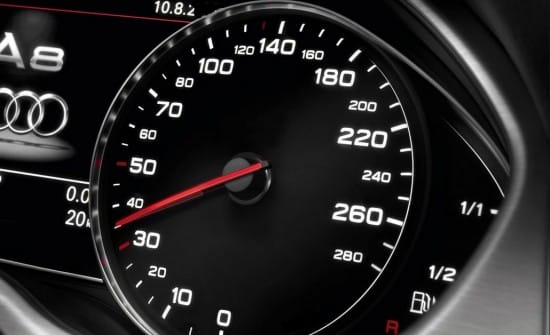 Dangerously fast: Johnson’s photo which landed him in jail
Soil scientist Johnson, 34, of Framlingham, was jailed for six months and lost his license for a year when he admitted dangerous driving at Ipswich Crown Court last week.

His wife, Helen told the Suffolk Gazette: “He was full of remorse. He uses the road up to Norfolk every day and never normally gets above 15mph because of all the lorries and farm machinery.

“He just got carried away and realises it was stupid to show off with the photograph. Justin will regret it for the rest of his life.”

Meanwhile, Suffolk County Council is investigating ways of speeding up journey times on the main road route between Suffolk and Norfolk.

They might finally approve plans to dual the whole stretch from Claydon, near Ipswich, right up to Norwich. But campaigners will be furious because councillors want the slow lane to become a ‘tractor lane’ – meaning cars will still only have one lane to use.