Boris Johnson insists Robert Mugabe was only on holiday in Zimbabwe 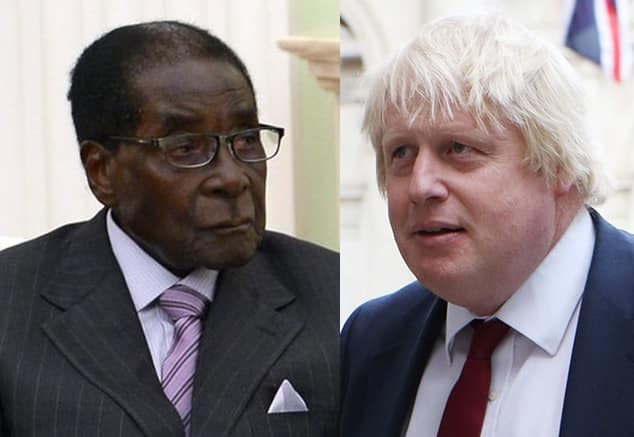 Bungling Boris Johnson insists detained dictator Robert Mugabe was only in Zimbabwe on holiday and should be released immediately.

The under-pressure Foreign Secretary was speaking after the Army staged a peaceful coup in the rogue African country, putting Mr Mugabe and his henchmen under house arrest.

He made a huge gaffe this week by saying British-Iranian citizen Nazanin Zaghari-Ratcliffe, jailed for five years on espionage charges while on holiday in Iran, had indeed been in the country training journalists.

His error could make her situation worse, and entitle the Iranians to keep her locked up for longer.

Desperate to avoid a repeat of his embarrassing gaffe, Mr Johnson told the House of Commons that Mr Mugabe, 93, had really only been in Zimbabwe on vacation.

He had been “enjoying the wildlife and beautiful countryside since 1987”.

Mr Johnson added: “It is clear Mr Mugabe and his lovely wife, Grace, had only been visiting Zimbabwe on holiday, and he had in no way been working there as a tyrannical dictator.

“There is certainly no evidence he caused misery and poverty to millions while denying human rights and eradicating all opposition.

“It is therefore right and proper that the Zimbabwe armed forces let Mr Mugabe go so he can return home to England to be with his friends and family.”

Downing Street insiders tried to brush aside Mr Johnson’s latest howler, with one saying: “Well at least it takes everyone’s minds off the Iranian affair.”

“The man gets it horribly wrong every time he opens his mouth,”a spokesman said.