Suffolk GazetteYou couldn\'t make it up
More
HomeNews
May 21, 2022 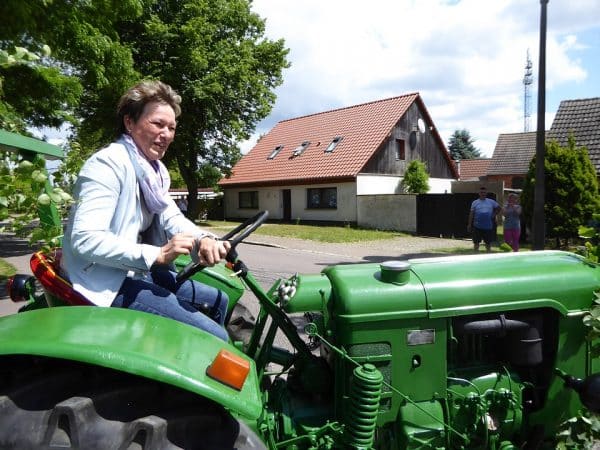 Norfolk is taking a giant leap out of the Dark Ages by announcing it will allow women to drive for the first time.

Females have been banned from driving down the county lanes and tracks because it was thought to cause promiscuity and family breakups.

But now Norfolk elders have conceded it is unlikely anything can split local brothers from their sisters, and so women can get behind the wheel after all.

However, they will initially only be allowed to drive tractors so that they can at least be seen to be working rather than having a jolly good time.

Woman Darlene Spuckler, 23, from Downham Market (pictured above), said she was delighted to get the chance to drive a tractor.

“This is liberating stuff,” she said. “I’ve watched my brother and our five sons working the field on the tractor and longed for the same freedom.”

Campaigners led by turnip mogul Ned Spuckler, 46, from Norwich, have been calling for a change in the law for years.

“Norfolk is fast catching up with the rest of Britain,” he claimed.

Norfolk elder Billy Bob Spuckler, 87, confirmed: “We are allowing women to drive tractors only for now.

“If they get that hang of it, and it does not cause the break-up of our close Norfolk families, then this may be extended to other vehicles.

It later emerged that women in Norfolk were getting the vote for the first time.

Suffolk police spokesperson Sgt Lorraine Fisher, 34, said the border with Norfolk would remain closed, just in case any Norfolk women try to make a run for it.

55,848FansLike
9,841FollowersFollow
May 21, 2022
Previous article
The virtual data room – how to manage mergers and acquisitions successfully
Next article
How deposits and withdrawals work at an online casino with no account