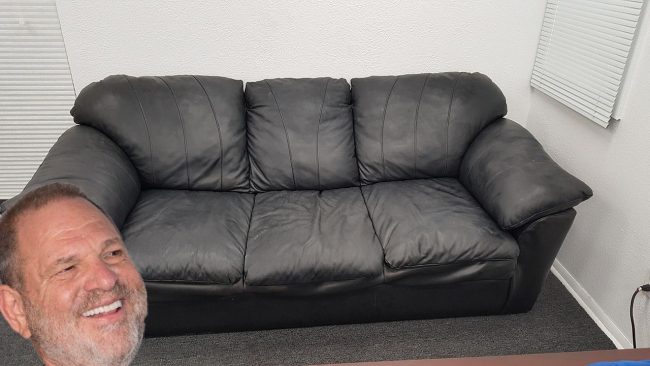 Owing to unforeseen circumstances, this beautiful casting couch is no longer required by its owner.

Mr Harvey Weinstein, of Hollywood in the USA, says he needs to sell the classy black leather couch as soon as possible.

The piece of furniture, which took pride of place in Mr Weinstein’s plush offices, was purchased new from Walmart in 1996.

Considering the amount of use it has had, it is in superb condition, aside from a couple of stains and some well-worn springs.

The casting couch is an ideal size for two people to enjoy, although three can use it at the same time if the opportunity arises.

Mr Weinstein, 65, has unexpectedly had to leave his office in recent days and is keen to get rid of the couch, of which he has some fond memories.

A pal of Mr Weinstein said: “This casting couch is one of the most famous in Hollywood. It is super comfortable and does its job jolly well.

“It is for sale for $75 and the new owner will get years of pleasure from it.

“For its age, it is in superb condition. It needs only a bit of a wipe down to bring it back to its former glory.”

Mr Weinstein was also selling two bathrobes and a bottle of massage oil, but these have already been snapped up by eager members of staff from the Los Angeles Police Department.

Anyone interested in purchasing the casting couch, can visit this link and make a prompt payment.

The buyer is expected to collect the casting couch, as Mr Weinstein has had to leave the area in order to check in to rehab.