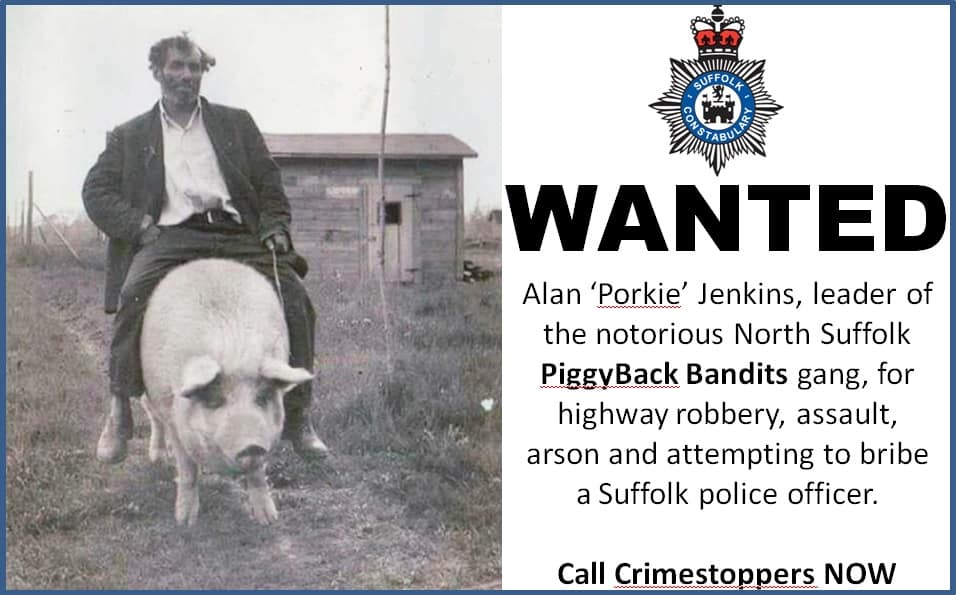 Suffolk Police are appealing for help in the hunt for Alan “Porkie” Jenkins, leader of the notorious PiggyBack Bandits gang.

The outlaws have brought terror to north Suffolk for years, committing violent highway robberies before escaping across fields riding on the back of their pigs.

Detectives say new information has uncovered Jenkins as the brutal leader of the gang, which is thought to be responsible for 73 robberies on the A12 and A143 in the past four years alone.

The gang, normally consisting of three men on pigs, hide in bushes by the side of the road and pounce on unwary cyclists as they pass by.

Phones, wallets and watches are then snatched before the robbers turn tail and trot away.

Violent leader Jenkins, who is believed to have moved to Suffolk from Norfolk, is also wanted for burning down a village hall in Botesdale, beating up a pub landlord in Rickinghall, and attempting to bribe a police officer in Lowestoft.

A police spokesman said: “We will no longer tolerate Jenkins and his so-called PiggyBack Bandits.

“They had developed something of a cult status in Suffolk – but there is nothing glamorous about their crimes.

“It is only a matter of time before they kill someone.”

It is thought the gang, which has a hideout somewhere near Ixworth, trains the pigs which are cheaper than horses and can hide more easily in roadside verges.

Police denied they had made a pig’s ear of catching the gang red-handed last week when a passing patrol car allegedly stopped politely to allow some pigs to cross a country lane without realising gang members were crouched behind them.

“That is a rumour put about by local author Lorraine Fisher, 34, who has been writing a gangland book about the PiggyBack Bandits.

“She is just after easy publicity, so ignore her,” the police spokesman said.

Anyone with information about Alan “Porkie” Jenkins and his PiggyBack Bandits is urged to contact Crimestoppers immediately.