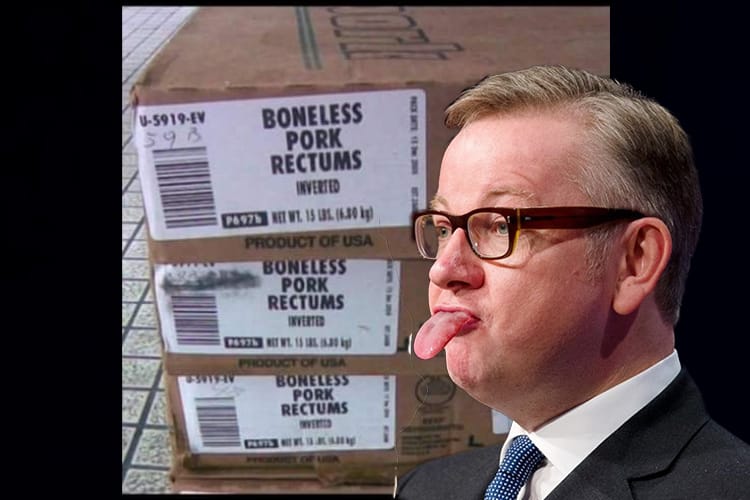 Police are investigating after Michael Gove was among a group of Brexit-supporting Tory MPs who were secretly fed pig rectum at a fund-raising dinner.

More than 200 guests at the £100-a-head gala in Westminster, laid on by a right-wing charity, unwittingly ate pork anus.

Pranksters working for the catering company shipped in boneless pork rectums from America – pictured above – to be sliced up and served on tasty vol-au-vents.

One of the kitchen staff took the photograph of the offensive pork product when it was delivered, and sent it to a private Facebook group run by Remainers who do not want Britain to leave the EU.

He boasted it was being fed to the Brexit MPs “who are like pigs with their snouts in the trough”.

But the tasteless joke could backfire if police decide to press charges.

A source inside the Metropolitan Police said: “We have evidence that four boxes of boneless pork rectums were delivered to a catering company based in Suffolk.

“The 30 kilograms of anus were then cut up, added to an appetising garlic sauce and placed upon delicate small pastries.

“These were then served to guests at a black-tie dinner in the House of Commons.”

The dinner was laid on by the Brexit Means Brexit charity, which raises money for individuals affected by Remainers. There is no suggestion organisers knew of the pigs anus conspiracy.

Instead, police are focusing their attention on the catering company.

Boneless pigs rectum is often served as a delicacy in America, particularly by the Chinese community.

Food experts say it is perfectly legal to be served in the UK, but they advise that customers should be warned of the content first.

This is not the first time that the Conservatives have been caught in a pork controversy. Former Prime Minister David Cameron was alleged to have done something rude with a dead pig while at university, and he later bought a Suffolk pig farm after leaving Parliament.