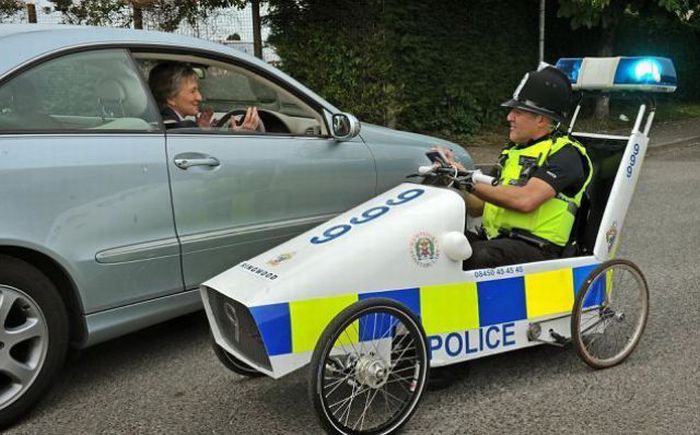 Suffolk Police have issued officers with a cheap electric patrol car in face of yet more budget cuts.

The force needs to shave millions in costs, and the new compact police car fits the (old) bill.

It is snug enough for just one traffic cop and boasts striking police colours as well as flashing blue lights and a loud siren.

But police drivers have complained that the £900 vehicle can reach a top speed of only 17 mph and needs recharging every five miles. They also get wet when it rains.

However, at least one speeding driver has already been nicked since the patrol car was introduced last week – a lady who is seen pictured above being issued with her ticket on the road to Ufford out of Woodbridge.

A police spokesman said: “We have had to make some tough cost-cutting decisions. We’ve seen other forces using flash BMWs and other high-performance vehicles for their patrol cars, but in Suffolk, that’s a waste.

“Our new fleet of 25 electric cars may look inadequate for modern-day policing, but it’s impossible to drive faster than 20 mph anywhere in the county anyway so we’ll be fine.”

Officers were not so positive. One traffic cop fumed: “I look like an idiot driving around in this.

“Kids have been throwing eggs at me and running off, knowing there is no way I can catch them up. It even takes 20 seconds to get out of the car, so I can’t run after them either.”

Another traffic cop added: “My electric charge ran out when I was in the middle of nowhere outside Framlingham. I had to ask a local farmer to give me a lift back to town.”

55,847FansLike
9,841FollowersFollow
April 21, 2017
Previous article
Every word in the English language is formed from the same 26 letters, research reveals
Next article
Suffolk man makes candle from his ear wax