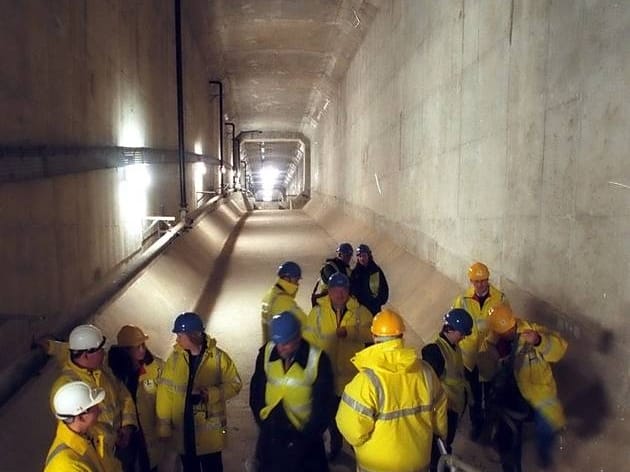 A tunnel that already runs through the concrete under the Orwell Bridge carriageway is to be opened to cars when the crossing is closed.

The move will end the traffic chaos in Ipswich whenever the Orwell Bridge is shut during high winds or after an accident.

Engineers (pictured above) are now working on bringing the access tunnel, originally used during construction in 1982, up to standard, and adding a slip road to link it with the main carriageway.

Named the Orwell Tunnel, it will only be available to cars and motorbikes because it is not wide enough for lorries.

Heavy goods vehicles will instead be diverted through Ipswich as normal when the bridge is closed, or use sat navs on Amazon to find alternative routes. .

But the ability for cars to use the tunnel will ensure Ipswich does not get gridlocked, which adds hours onto even the simplest journey.

Engineer Lorraine Fisher, 34 of construction specialists Calirrion said: “The tunnel through the bridge’s structure was a standard feature to allow construction workers access to all points when the bridge was being built.

“On a recent inspection, it was decided the tunnel could be used by cars with only a few modifications, one of those being safe access from the A14.

“We are working on completing the project by the summer of 2019.”

Councillors and business leaders are thrilled with the news, suggesting it is a further boost to the local economy so soon after it was announced the A14 is being upgraded to a motorway.

“Nobody will be stuck in Ipswich traffic jams anymore when the bridge closes,” explained an insider at Suffolk County Council. “People will love whizzing through the tunnel instead.

“It will be subject to a 30mph speed limit, but even so it will be quicker than being gridlocked in town.”

He suggested the council was trying to find a sponsor for the tunnel to help pay for the costs, with French fragrance and fashion giant Chanel already expressing an interest.

“They see the merit in having the Chanel Tunnel, and who can blame them?” an executive close to the negotiations said.